Matt Berninger net worth: Matt Berninger is an American singer-songwriter who has a net worth of $3 million. He is best known for being the lead singer of the indie rock band The National.

Matt Berninger was born in Cincinnati, Ohio in February 1971. Berninger played trumpet in his high school's band and studied at the University of Cincinnati. He is known for his classic baritone voice. The National formed in 1999 and released their self-titled debut album in 2001. They released the albums Sad Songs for Dirty Lovers in 2003 and Alligator in 2005 before having more success with the album Boxer in 2007. The band broke through with their 2010 album High Violet which reached the Top 5 in the US, Belgium, Canada, Denmark, Ireland, New Zealand, Sweden, and the UK. Their 2013 album Trouble Will Find Me had similar success and was nominated for a Grammy Award for Best Alternative Album. Matt is married to former The New Yorker editor Carin Besser who has also written songs and provided background vocals for The National. British artist Joe Simpson painted a portrait of Berninger that was displayed at The Royal Albert Hall. 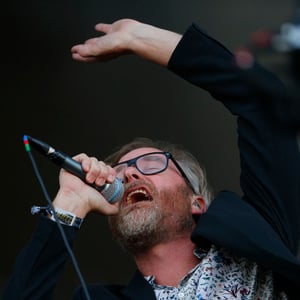