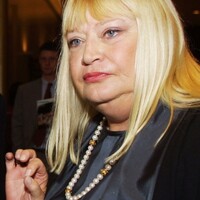 Mary Travers Net Worth: Mary Travers was an American singer-songwriter who had a net worth of $3 million. Mary Travers was born in Louisville, Kentucky in November 1936 and passed away in September 2009. Travers is best known as being part of the folk music trio Peter, Paul, and Mary. Peter, Paul, and Mary were a folk-singing trio who released 20 albums. Their self-titled debut studio album was released in 1962 on Warner Bros. and hit #1 on the Billboard 200 chart. The group's 1963 albums Moving and In the Wind reached #2 and #1 respectively. Their most popular singles include "Lemon Tree", "If I Had a Hammer (The Hammer Song)", "Puff (The Magic Dragon)", "Blowin' in the Wind", "Don't Think Twice, It's All Right", "I Dig Rock and Roll Music", and "Leaving on a Jet Plane". Mary also released five solo studio albums in the 1970s. Travers was diagnosed with leukemia in 2004. Mary Travers passed away on September 16, 2009 at 72 years old due to complications related to a bone marrow transplant and other treatments.