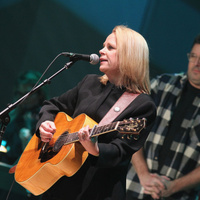 Mary Chapin Carpenter net worth: Mary Chapin Carpenter is an American singer and songwriter who has a net worth of $8 million. Mary Chapin Carpenter was born in Princeton, New Jersey in February 1958. Her styles include country, Americana, folk, and soft rock and she also plays the guitar. Carpenter released her debut studio album Hometown Girl in 1987 and the album State of the Heart in 1989. She released the albums Shooting Straight in the Dark in 1990 and Come On Come On in 1992. Carpenter's album Stones in the Road was released in 1994 and reached #1 on the US Country and Canadian Country charts. She also had success with her albums A Place in the World in 1996, Time* Sex* Love* in 2001, Between Here and Gone in 2004, The Calling in 2007, Come Darkness, Come Light: Twelve Songs of Christmas in 2008, The Age of Miracles in 2010, Ashes and Roses in 2012, Songs from the Movie in 2014, and The Things That We Are Made Of in 2016. Carpenter's most popular singles include "Passionate Kisses" and "Shut Up and Kiss Me". She won a Grammy Award in 1992, 1993, 1994, and two in 1995.