What Was Marvin Gaye's Net Worth?

Marvin Gaye was an American singer-songwriter, musician, and record producer who had a net worth of -$9 million at the time of his death in 1984. When Marvin died, his estate was in debt to the tune of $9 million. He left no will and most of his debt was owed to the IRS for unpaid taxes.

Cash-strapped before he died, he sold the majority of his music royalty rights to Motown Records but managed to keep the publishing rights. For several years after his death, the IRS received all of the royalties earned by his estate, roughly $1 million per year.

Gaye was instrumental in shaping the sound of R&B music and was one of the pioneers and most consistent hitmakers of Motown. Blessed with a mellifluous tenor and three-octave vocal range, his talent started to come to the surface as he signed a solo contract with Motown Records.

Throughout the 1960s, Marvin saw the release of a string of hits like "How Sweet It Is (To Be Loved By You)" and "I Heard It Through the Grapevine" as well as duets with Mary Wells and Tammi Terrell. As the years passed, he turned from a singer into a sex symbol and social commentator, earning the titles Prince of Motown and Prince of Soul. Gaye released 25 studio albums, and 67 of his singles made it onto the "Billboard" charts. Though he is primarily known for his music, Marvin also appeared in the TV movie "The Ballad of Andy Crocker" (1969) and the film "Chrome and Hot Leather" (1971). Gaye's life was tragically cut short in April 1984, just one day before his 45th birthday. He was posthumously inducted into the Rock and Roll Hall of Fame in 1987.

Marvin Gaye was born Marvin Pentz Gay Jr. on April 2, 1939, in Washington, D.C. His father, Marvin Sr., was a minister, and his mother, Alberta, was a domestic worker. Marvin grew up with brother Frankie and sisters Zeola and Jeanne, and he had two half-brothers, Michael and Antwaun. Gaye's first home was in the Fairfax Apartments, a public housing project in the Southwest Waterfront neighborhood. The family belonged to the Pentecostal church the House of God, and Marvin began singing in church at the age of 4. Gaye's father was abusive and often gave Marvin "brutal whippings." Gaye attended Syphax Elementary School, Randall Junior High School, Spingarn High School, and Cardozo High School, and he appeared in school plays and sang in the glee club and doo-wop groups. Marvin dropped out of school at age 17 and enlisted in the U.S. Air Force. He was unhappy with the menial tasks he had to perform as a basic airman, so he pretended that he was mentally ill and was soon discharged.

After being discharged from the military, Gaye formed a vocal quartet, The Marquees, with his friend Reese Palmer, and they worked with Bo Diddley, who helped the group get signed to OKeh Records, a subsidiary of Columbia. The Marquees were dropped from the label after their single "Wyatt Earp" failed to chart. Harvey Fuqua, the co-founder of the R&B group the Moonglows, hired The Marquees, and they changed their name to Harvey and the New Moonglows and moved to Chicago.

The group disbanded in 1960, and Gaye moved to Detroit and signed with Tri-Phi Records, working as a session musician on several of the label's releases. After performing at Berry Gordy's house in December 1960, Marvin was signed to Tamla, a subsidiary of Gordy's Motown Records.

Gaye's first single, "Let Your Conscience Be Your Guide," was released in May 1961, and his debut album, "The Soulful Moods of Marvin Gaye," was released the following month. He co-wrote the 1962 hit "Beechwood 4-5789" (performed by the Marvelettes), and he also had a solo hit that year, "Stubborn Kind of Fellow."

In 1963, "Pride and Joy" became his first single to reach the top ten on the "Billboard" Hot 100 chart. Marvin released nine solo albums in the' 60s and five collaborative albums, one with Mary Wells, one with Kim Weston, and three with Tammi Terrell. That decade, 11 of his singles cracked the top ten on the "Billboard" Hot 100, with 1968's "I Heard It Through the Grapevine" reaching #1. 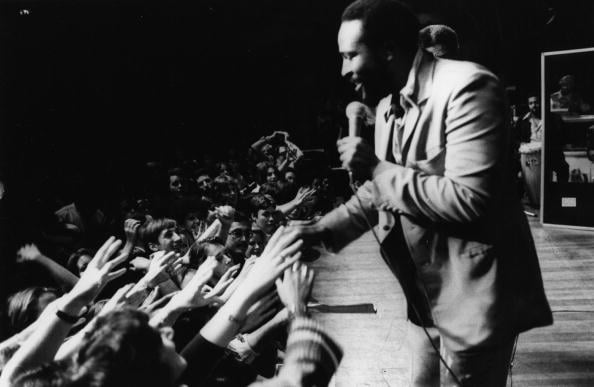 Gaye's next four studio albums reached the top ten on the Top R&B/Hip-Hop Albums chart, and 1976's "I Want You" reached #4 on the "Billboard" 200 chart. In 1982, Marvin moved from Motown to the CBS Records subsidiary Columbia, and in October of that year, he released his most successful album, "Midnight Love," which was certified 3x Platinum in the U.S. and reached the top ten in the U.S., U.K., Canada, New Zealand, and the Netherlands.

On April 1, 1984, Marvin intervened when his parents were fighting at the family home in Los Angeles. The situation escalated, and Gaye and his father got into a physical altercation. Marvin Sr. shot his son in the chest and shoulder with a gun that Gaye had given him as a gift. Marvin was pronounced dead at California Hospital Medical Center at 1:01 p.m., less than 30 minutes after the shooting took place. Gaye's brother Frankie revealed that as Marvin was dying, he said, "I got what I wanted… I couldn't do it myself, so I had him do it… it's good, I ran my race, there's no more left in me."

On April 5th, more than 10,000 mourners attended Gaye's funeral at Forest Lawn Memorial Park, and Marvin's body was cremated; Gaye's ex-wife Anna and his three children spread half of his ashes near the Pacific Ocean. Marvin died without a will, so 17-year-old Marvin III became co-administrator of the estate. Gaye was in debt at the time of his death, but the debts were eventually paid off by royalties from his music. Marvin's father was charged with first degree murder, but after it was discovered that he had a brain tumor, the charges were reduced to voluntary manslaughter. He received a suspended sentence of six years plus five years of probation.

Gaye was inducted into the NAACP Image Awards Hall of Fame in 1988, and he received a star on the Hollywood Walk of Fame in 1990. Marvin was also posthumously inducted into the Michigan Rock and Roll Legends Hall of Fame (2005), Rhythm and Blues Music Hall of Fame (2014), and Songwriters Hall of Fame (2016). In 2006, Washington, D.C.'s Watts Branch Park was renamed Marvin Gaye Park, and in 2009, the 5200 block of Foote Street NE (which is an entrance to the park) officially became known as Marvin Gaye Way. In 2019, the United States Postal Service released a stamp featuring Marvin's image as part of their Music Icons series. 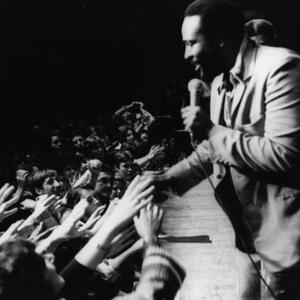