Martina McBride net worth: Martina McBride is an American country music singer and songwriter who has a net worth of $45 million. Over time, McBride developed a cross-over pop country sound similar to the likes of Shania Twain and Faith Hill, netting her a string of major hit Billboard singles. To date, five of Martina's albums have gone platinum, two have gone double platinum. She has sold over 20 million albums worldwide.

Early Life: Martina McBride was born Martina Mariea Schiff in Sharon, Kansas on July 29, 1966. As a child, Martina developed a very early passion for singing. Every night after school, she would come home and sing along to the albums of popular singers such as Patsy Cline, Linda Ronstadt, and Reba McEntire. Conveniently, Martina's father formed a band called "The Schiffters" when she was just nine years old. Soon Martina was singing backing vocals for the band and by the time she was a teenager she was even playing the keyboard.

Career: In 1987, Martina and a group of friends formed a band called Lotus. In 1988 Martina married a sound engineer named John McBride. In 1989, John and Martina moved to Nashville with the hopes that she could land a recording contract as a solo artist. After moving to Nashville, John was hired as a sound engineer by Garth Brooks. Martina soon joined her husband and Garth on the road. She even helped sell Garth Brooks souvenirs at concerts. Brooks eventually was impressed by Martina's voice and offered her the opportunity to open for him with the goal of her obtaining a recording contract. During this time, her husband was working with Charlie Daniels and Ricky Van Shelton, who lent a hand in helping produce her demo tape. This landed her a recording contract with RCA Nashville Records in 1991.

Martina released her first studio album, "The Time Has Come" in 1992. The title track made it to No. 23 on the country charts, but the next two singles failed to make the top 40.  Her second album "The Way That I Am" went Platinum. The first two singles brought Martina into the country top ten: "My Baby Loves Me" peaked at No. 2 and "Life No. 9" peaked at number six. The third single, "Independence Day", failed to reach the top ten but it won the Video and Song of the Year at the Country Music Association Award. It also earned the composer, Gretchen Peters, a Grammy nomination.

In 1995, McBride released "Wild Angels" and brought her another top five hit with the track "Safe in the Arms of Love." In 1997, Martina released two duets, "Still Holdin' On" with Clint Black, the lead-off single to her next album "Evolution," and "Valentine." McBride scored her second No. 1 song on the country charts with "A Broken Wing" in late 1997. "Evolution went on to produce four more top ten hits at country radio. By the end of 1998, the album was certified platinum for selling over 2 million units. She also won the CMA award for Female Vocalist of the Year and performed for President Bill Clinton during this time. In 1998, she released her first Christmas album which featured a rendition of "O Holy Night" that first charted in 1997 and continued to re-enter the charts until 2001.

Martina released her sixth studio album, "Emotion" in 1999. Its lead single "I Love You" reached No. 1 on the Billboard country charts and the follow-up singles "Love's the Only House" and "There You Are" made it to the top ten. In 2001, she released her first greatest hits album. It has been certified 3x platinum and is her highest-selling album to date. In 2004, McBride released "Martina," her seventh studio album, and won the CMA Female Vocalist Award for the fourth time. After finding success in country-pop crossover styled music, McBride released an album of country covers called "Timeless." The next year, she served as a guest coach on both "Canadian Idol" and "American Idol." "Waking up Laughing" in 2007 was McBride's ninth album, the first on which she had co-written some of the tracks. McBride wrapped production on her tenth studio album, "Shine,"  in 2008.

In November 2010, McBride left RCA, signed with Republic Nashville, and began working on her next album, "Eleven," which was not only her eleventh album but happened to be released in 2011. She released "Everlasting," a compilation of R&B and Soul covers, in April 2014. That same year, she earned her 17th Female Vocalist nomination from the CMA, tying her with Reba McEntire for the most nominations in any vocalist category. In 2016, she released "Reckless" through Nash Icon Records. It debuted at No. 2 on the Billboard Top Country Albums Chart.

McBride released the Christmas album "It's the Holiday Season" on October 19, 2018, and embarked on a tour. She also released a cookbook to accompany the album titled "Martina's Kitchen Mix: My Recipe Playlist for Real Life." This was her second cookbook following a 2014 release called  "Around the Table: Recipes and Inspiration for Gatherings Throughout the Year." In 2018, she launched a new show on Food Network called "Martina's Kitchen." In 2019, she began hosting a podcast called "Vocal Point." On May 4, 2020, McBride released the song "Girls Like Me."

Over the course of her career, McBride has released 14 albums and has headlined eight major concert tours.

Personal Life: McBride has been married to sound engineer John McBride since 1988. They have three daughters: Delaney Katharine (born December 22, 1994), Emma Justine (born March 29, 1998, and Ava Rose Kathleen (born June 20, 2005). After she became a mother, McBride reduced her touring schedule so that her daughters could have a normal upbringing.

Philanthropy: McBride is very active in a number of charities and serves as the spokeswoman for the National Domestic Violence Hotline as well as for the National Network to End Domestic Violence. She also works as the spokesperson for the Tulsa Domestic Violence and Intervention Services. She has hosted the Middle Tennessee YMCA's Celebrity Auction every year since 1995. In 2004, she worked with Kids Wish Network to fulfill the dying wish of a young girl with muscular dystrophy. McBride was awarded the Minnie Pearl Humanitarian Award in 2003. She also works with Loveisrespect, a national teen dating abuse hotline. In 2010, she performed "Unchained Melody" with Leona Lewis at the Stand Up 2 Cancer Telethon. McBride also started her own charity initiative called "Team Music is Love." 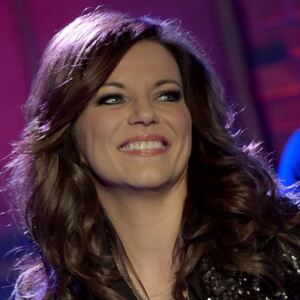