Martha Reeves Net Worth: Martha Reeves is an American singer and former politician who has a net worth of $5 million. Martha Reeves was born in Eufaula, Alabama in July 1941. She was the lead singer for the Motown girl group Martha and the Vandellas. She was the third of 11 children and her father was a minister.

She joined the Fascinations but left but they recorded. In 1957 she became part of the group The Del-Phis. Reeves took over as lead vocalist of the Vandellas after Gloria Williams left the group in 1962. Their hits included "Nowhere to Run", "(Love Is Like a) Heat Wave", "Jimmy Mack", "Dancing in the Street", and "Bless You". They had over 26 hits and had ten songs reach the Top 10 of the Billboard R&B singles chart. The group was inducted into the Vocal Group Hall of Fame in 2003 and were ranked #96 by Rolling Stone in their 2004 100 Greatest Artists of All Time. Martha also released seven solo studio albums. Her solo singles include "Power of Love", "Wild Night", "Love Blind", and "I'm Not Leaving". Martha has been married twice and has a son, three grandchildren, and a great-grandchild. 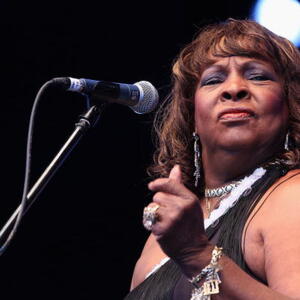