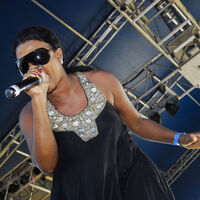 Marion Hall net worth: Marion Hall is a Jamaican singer and songwriter who has a net worth of $1.5 million. Marion Hall was born in Galina, Saint Mary, Jamaica in July 1972. She is also known by her stage name Lady Saw and she is known as the Queen of Dancehall. Hall became the first female DJ to win a Grammy Award and the first to be a certified triple-platinum artist. Her styles also include reggae, R&B, gospel, and soul. She released her debut studio album Lover Girl in 1994 and the album Give Me The Reason in 1996. Hall's album Passion was released in 1997 and reached #8 on the US Reggae chart. She has also released the albums 99 Ways in 1998, Strip Tease in 2004, Walk Out in 2007, My Way in 2010, and Alter Ego in 2014. Her album When God Speaks was released in 2016 and reached #4 on the US Reggae chart. She is perhaps best known for being featured on the No Doubt single "Underneath It All" which reached #3 on the Billboard Hot 100.