Marie Fredriksson net worth: Marie Fredriksson was a Swedish pop singer, songwriter, and pianist who had a net worth of $60 million at the time of her death. Tragically, Marie died on December 9, 2019 at the age of 61 after battling cancer for 17 years.

Marie Fredriksson was born in Ossjo, Sweden in May 1958. She was best known for being half of the pop rock duo Roxette, with Per Gessle. The duo formed in 1986 and released their debut studio album Pearls of Passion that year. The album reached #2 in Sweden. Roxette released the album Look Sharp! in 1988 and it reached #1 in Sweden and sold nine million copies worldwide. Their 1991 album Joyride reached #1 in seven countries and sold 11 million records. Their song "It Must Have Been Love" was a monster hit that was featured in the Julia Roberts/Richard Gere movie "Pretty Woman". The group also had albums that were successful worldwide and reached #1 in Sweden with Tourism in 1992, Crash! Boom! Bang! in 1994, Have a Nice Day in 1999, and Room Service in 2001. They also achieved success with the albums Charm School in 2011, Traveling in 2012, and Good Karma in 2016. Roxette's hit singles include "The Look", "Dangerous", "It Must Have Been Love", and "Joyride". Marie Fredriksson has also released several solo albums. 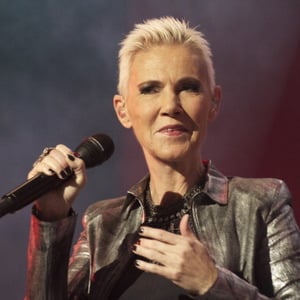