Maria Aragon net worth: Maria Aragon is a Canadian singer singer and YouTube star who has a net worth of $625,000 thousand. She is of Filipino descent. Maria Aragon was born on July 17, 2000 in Winnipeg, Manitoba. She is the youngest of four children, and her passion for music is influenced by her father.

Maria Aragon first became famous for a video posted to her sister's YouTube channel which showcased her talent to friends and family. Since the age of seven she has been posting videos numerous music covers on YouTube. Her cover of Lady Gaga's "Born This Way" became a viral sensation. In a week, her video reached over 11 million views. As of today, the video had over 60 million viewss. Lady Gaga invited an already surprised Aragon to perform "Born This Way" with her at The Monster Ball Tour concert in Toronto. She appeared in commercials in 2011 for HTC singing the K'naan song, Wavin' Flag and Gap Kids, singing "I Want Candy". She performed at the 2011 Canada Day concert on Parliament Hill. On July 20, 2011, she arrived in the Philippines where she signed a contract with Star Records to promote an album. To promote her album, she appeared on several ABS CBN shows including the musical variety show, ASAP Rocks and series of mall shows. She also starred in the 2011 ABS-CBN Christmas Station ID, titled "Da Best ang Pasko ng Pilipino. She also sang the 2011 Christmas Jingle of SM Supermalls entitled SM ChriSMs. She sung the Philippine National Anthem at MGM Studios for the Pacquiao and Marquez fight on November 12, 2011. 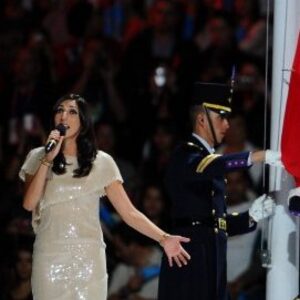