In the mid-1970s he formed Los Bukis with whom he achieved great success in Mexico, Central and South America, as well as with Hispanic listeners in the United States. As lead singer and main songwriter of Los Bukis, Solís became known in the industry for writing and producing for popular singers such as Marisela and Rocío Dúrcal. In 1996, after almost 20 years of working with Los Bukis, Solis launched a solo career and remained popular in his native Mexico as well as in countries throughout Latin America and Spain. In the United States, Solís was also successful, with over 30 entries on Billboard's Hot Latin Tracks chart, including multiple No. 1 hits. He has also been the recipient of several Latin Grammy Awards. Solís was married to Beatriz Adriana, a Mexican singer, with whom he had a daughter. His daughter is Beatriz Adriana performs under the name B.A. Solís. The couple later divorced and Solis married Cristian Salas, whom he met when he was with Los Bukis and she was cast as his love interest in the music video for A Aquella. He also has two children with his wife Critian, daughters Alison and Marla. Solis became a grandfather when his daughter Beatriz gave birth to her son Leonardo. Solis also has a son, Marco Antonio Solís, Jr.. Little is known about son Marco. He is also a sought-after record producer, having worked with Olga Tañón, Ana Bárbara, and most recently Enrique Iglesias and Anaís, among others.

On August 5, 2010 Marco Antonio Solís received his star on the Hollywood walk of fame. 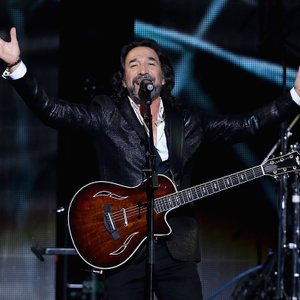