She was known as "The Queen of Gospel" and was also a civil rights activist. Jackson recorded 30 albums for Columbia Records including her debut album You'll Never Walk Alone in 1952 up until her last album What the World Needs Now in 1969. Harry Belafonte called Mahalia Jackson "the single most powerful black woman in the United States". Jackson had a dozen gold records that sold a million copies each. She won Grammy Awards for Best Gospel or Other Religious Recording for "Every Time I Feel the Spirit" and "Great Songs of Love and Faith". She also won the Grammy Lifetime Achievement Award and Best Soul Gospel Performance by "How I Got Over". She is a member of the Rock and Roll Hall of Fame, the Hollywood Walk of Fame, the Gospel Music Hall of Fame, and had as tamp issued in her honor. Mahalia Jackson passed away on January 27, 1972 at 60 years old of heart failure and diabetes complications. 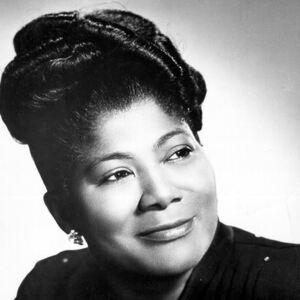