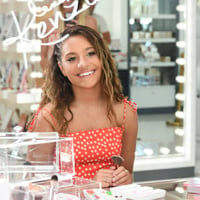 Mackenzie Ziegler net worth: Mackenzie Ziegler is an American dancer, singer, actress, and model who has a net worth of $3 million. Mackenzie Ziegler was born in Pittsburgh, Pennsylvania in June 2004. She is best known for appearing on the reality television series Dance Moms on Lifetime as the younger sister of dancer and actress Maddie Ziegler. Mackenzie Ziegler has more than 12 million followers on Instagram as well as more than 10 million fans on Musical.ly and three million subscribers on YouTube. She released her debut studio album Mack Z in 2014 and the album Phases in 2018. Ziegler has appeared on other TV series and TV movies including The Today Show, Nightline, Abby's Ultimate Dance Competition, The Today Show, Good Day New York, Nicky, Ricky, Dicky & Dawn, The View, So You Think You Can Dance, Total Eclipse, Dancing with the Stars, Dancing with the Stars: Juniors, Brat Holiday Spectacular, and more. In 2018 she won a Teen Choice Award for Choice Muser.