Lynn Anderson net worth: Lynn Anderson is an American country singer who has a net worth of $10 million dollars. Lynn Anderson was born in Grand Forks, North Dakota, and began performing when she was in elementary school, appearing at horse shows on the West Coast. She won 700 trophies, and then went on to appear on the local television show, "Country Caravan".

Her mother was a successful country songwriter, and Lynn Anderson was invited to sign with her first label, Chart, after an executive heard her singing at a sing-along with some of the artists for whom her mother wrote hit songs. Her third single reached the Top 40, and she was on her way. She found success in the mid-60s, recording multiple hit tracks, and appearing as a regular performer on "The Lawrence Welk Show". She then crossed over into pop in the 70s, and subsequently returned to country in the early 80s. She has continued to tour successfully to this day, and has won multiple music awards, including a Grammy. 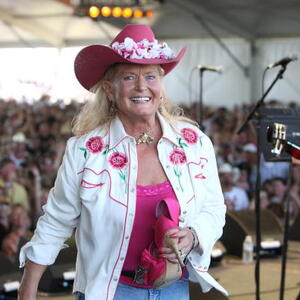