What is Luke Bryan's Net Worth?

Luke Bryan is an American country singer, songwriter and guitarist who has a net worth of $160 million. Luke Bryan has earned his net worth through his many singles, albums, EP's and music videos, as well as his songwriting and co-producing work. Luke is consistently one of the highest paid artists in the world. Between June 2017 and June 2018, Luke Bryan earned $50 million from his various endeavors. Between June 2018 and June 2019 he earned $43 million. Between June 2019 and June 2020 he earned $45 million. When he tours, Luke earns $1 million per show. He earns $12 million per year as a judge on "American Idol".

Thomas Luther "Luke" Bryan was born in Leesburg, Georgia, on July 17, 1976. His father Tommy was a peanut farmer. When he was nineteen years old, he had plans to move to Nashville, Tennessee. However, his older brother Chris was unexpectedly killed in a car accident. Following the family tragedy, Bryan instead moved to Statesboro, Georgia, where he attended Georgia Southern University. He graduated in 1999 with a bachelor's degree in business administration, finally moving to Nashville two years later.

After arriving in Nashville, Bryan joined a publishing house. His first job in the music industry was writing songs for such artists as Travis Tritt and Billy Currington. While performing in a club, an A&R representative offered Bryan a contract with Capitol Records Nashville.

Bryan's debut single "All My Friends Say," co-written with producer Jeff Stevens, made it to No. 5 on the Hot Country Songs chart. His debut album "I'll Stay Me" was released in August 2007, and Bryan either wrote or co-wrote 11 out of the 12 songs featured on it. The album's singles "We Rode in Trucks" and "Country Man" reached No. 33 and No. 10, respectively. Bryan's second album "Doin' My Thing" was released in October 2009. The singles "Rain Is a Good Thing" and "Someone Else Calling You Baby" were written by Bryan with Dallas Davidson and Jeff Stevens, respectively. Both of the songs reached No. 1 on the country music charts.

The single "Country Girl (Shake It for Me" was released on in February 2011, co-written by Bryan and Davidson. It peaked at No. 4 on the country music charts, and No. 22 on the Billboard Hot 100 chart. "Country Girl" was the first single off his third album "Tailgates & Tanlines," which came out in August that year. The album hit No. 1 on the Top Country Albums chart, and No. 2 on the Billboard 200 chart. 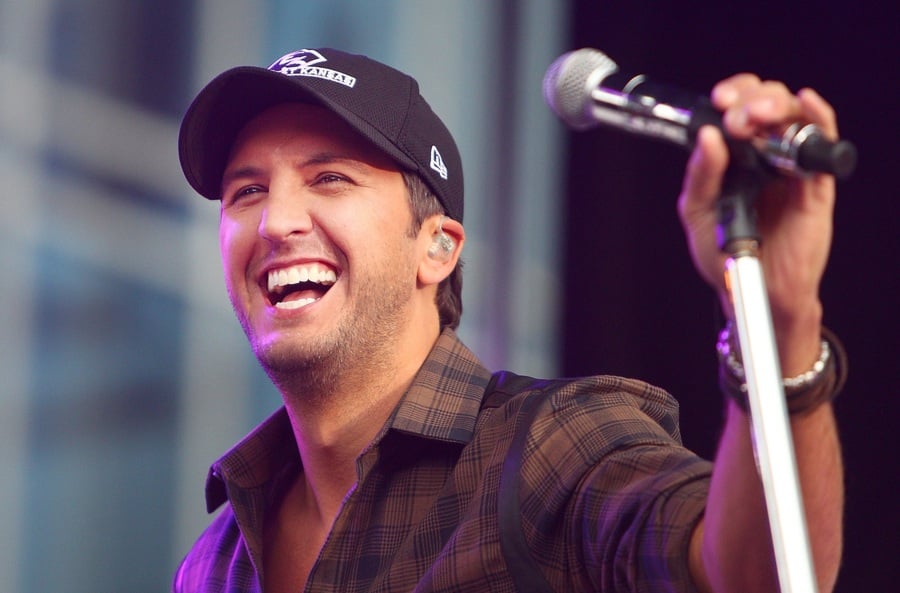 Prior to 2013, Bryan also had released multiple EPs such as "Spring Break with All My Friends" (2009), "Spring Break 2…Hangover Edition" (2010), "Spring Break 3…It's a Shore Thing" (2011) and "Spring Break 4…Suntan City" (2012). In January 2013, Bryan announced the release of a compilation album "Spring Break…Here to Party," which would feature songs from his previous "Spring Break" EPs in addition to two new songs. The album dropped in March 2013, debuting at No. 1 on the Billboard 200 chart. It was his first album to top the all-genre album chart.

His fourth studio album "Crash My Party" was released in August 2013. It spawned several hit singles, including the songs "Crash My Party," "That's My Kind of Night" and "Drink a Beer." In March 2014, he released his sixth Spring Break EP, "Spring Break 6…Like We Ain't Ever." That same day, he celebrated his sixth consecutive year performing during spring break at Spinnaker Beach Club in Panama City Beach, Florida. His final Spring Break EP, "Spring Break…Checkin' Out," was released in March 2015. It was followed in May 2015 by his fifth studio album "Kill the Lights," which debuted at No. 1 on the Billboard 200 chart. All six of the singles from "Kill the Lights" reached No. 1 on the Billboard Country Airplay chart, a record that made Bryan that first artist in the history of the chart to have six number one singles from one album. Bryan's sixth album "What Makes You Country" was released in December 2017.

Bryan is the winner of multiple awards, including two Academy of Country Music Awards, nine American Country Awards and one CMT Music Award.

Other Projects and Business Ventures

In 2010, Bryan appeared on an episode of "Celebrity Apprentice" along with fellow country star Emily West. Their task was to give a makeover to an up-and-coming country star. Bryan was selected to be on Bill Goldberg's team, and West joined Cyndi Lauper's team. Bryan's performance failed to impress the judges, resulting in a loss for his team. In addition to appearing on the show together, Bryan and West donated a month's worth of the sales of their songs, "Rain Is a Good Thing" by Bryan and "Blue Sky" by West, to Cyndi Lauper's charity The Stonewall Community Foundation. In total, they raised $25,000. Additionally, Bryan joined the team of judges on Seasons 16 to 18 of the reality competition show "American Idol"

Bryan married Caroline Boyer on December 8, 2006. The couple have two sons together. As previously mentioned, tragedy struck his family when Bryan was nineteen, when his older brother was killed in a car accident. They suffered a second tragedy in 2007 when his older sister Kelly passed away at home unexpectedly of unknown causes, only days after organizing a group of friends to go watch his debut at the Grand Ole Opry. As if that wasn't enough, Kelly's husband Ben died in 2014. As a result, Bryan and his wife began raising their nephew and two nieces.