Louis Armstrong Net Worth: Louis Armstrong was an American jazz trumpeter and singer who had a net worth of $10 million dollars. Louis Armstrong (August 4, 1901 – July 6, 1971) was born in New Orleans, Louisiana to a very poor family. The grandson of slaves, Armstrong spent his childhood and youth in extreme poverty, especially after his dad took off with another woman.

Thus, Louis and his little sister Beatrice were brought up by their mother and grandmother. Already feeling the hardships of life, Louis was eleven when he quit school to earn money for his family by singing in a quartet of boys who were performing on the street. This was the year when Armstrong was first introduced with the cornet by cornet player Bunk Johnson. But it was also the time when he started getting into trouble. After spending some time in a home for troubled kids, he went on to work at day and develop his music skills at night. He even performed with local jazz bands when he got the chance. It was Joe "King" Oliver who first recognized Louis' talent. Mentored by the famous cornet player, Louis did various small jobs for Oliver in return. After his tutor left for Chicago, the world´s center of jazz at the time, Louis started performing on steam boats that were touring down and up the Mississippi River. This helped him hone his skills and even learn how to read music. In 1922, Louis went to Chicago to join Oliver's band, with which he played for two years. In 1924, Louis already headed to the Big Apple at the request of acclaimed New York bandleader Fetcher Henderson. There, he switched to playing the trumpet and developed energetic and creative style that caught the ear of the New York jazz scene. Actually, there was no person that could play like Louis at the time!

Soon, he headed back to Chicago to play with his Hot Five and Hot Seven groups, creating such hits as "Potato Head Blues," "Muggles" and "West End Blues. The rhythms that he created in the process became the standard and the agenda for jazz musicians for many years to come. As for his trademark music genres, they are dixieland, jazz, swing, traditional pop. Even though he was living in a severely racially divided America, Louis Armstrong managed to cross skin boundaries and became one of the most famous jazz musicians of the 20th century. The world lost a great man and rarely talented musician when Armstrong died in his sleep from a heart attack on July 6, 1971. 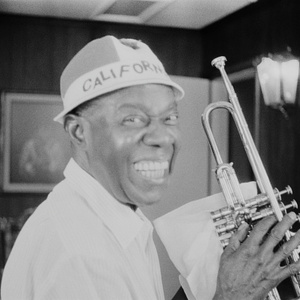