How much is Lorrie Morgan Worth?

Lorrie Morgan net worth: Lorrie Morgan is an American country singer who has a net worth of $6 million. Lorrie Morgan gained her worth through producing a string of chart-topping hits from the late 1980s. The daughter of the late country singer George Morgan started performing at the age of 13. When her father died in the mid 70's, she took over her father's band at the age of 16. The band came to an end a few years later. She had a few minor hits in the late 1970's, including "I'm Completely Satisfied With You", an electronically dubbed duet with her late father. Almost a decade later, Morgan scored a hit with 1989's Trainwreck of Emotion. Morgan rapidly became a firm fixture on the country charts, scoring three number one hits: Five Minutes, What Part of No and I Didn't Know My Own Strength. She was voted the Female Vocalist of the Year in 1994 by TNN's Music City News Awards. By this time, Morgan had three albums under her belt and is the only female country singer to have three albums in a row to be certified platinum. More recently, Morgan released two albums: A Moment in Time (2009), which covers 14 tracks of traditional country music and I Walk Alone released in 2010. Her album Letting Go…Slow was released in 2013. 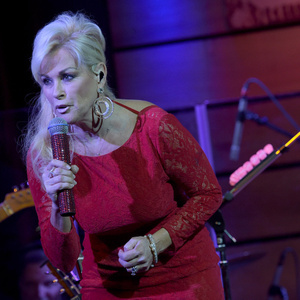