Early Life: Lynn was born as Loretta Webb in Butcher Hollow, Kentucky on April 14, 1932. Her mother's name was Clara Marie and her father's was Melvin Theodore. The couple had a total of eight children, of which Loretta was the second. Her father farmed but primarily worked as a coal miner. He died at the age of 52 of black lung disease.

When Lynn was 15 years old, she married Oliver Vanetta "Doolittle" Lynn after meeting him a month earlier. They soon after left Kentucky to move to Custer, Washington when Lynn was pregnant with the couple's first child. Lynn began teaching herself how to play the guitar after her husband bought her one in 1953

Career: After having learned how to play the guitar, Lynn formed her own band, Loretta and the Trailblazers, and began playing in local venues in Washington. In 1960, she recorded her first song, "I'm a Honky Tonk Girl," in Hollywood after the founder of a record company, Zero Records, heard Lynn perform on a talent contest in Tacoma, Washington. Lynn soon signed a contract with Zero and recorded her first album.

She began touring the country in hopes that her music would climb the country music charts. By the time she reached Nashville, "I'm a Honky Tong Girl" had made it to number 14 on Billboard's Country and Western chart. She signed a new deal with the Wilburn Brothers Publishing Company and signed a contact with Decca Records. By the end of 1960, Lynn was included in Billboard magazine's list of Most Promising Country Female Artists.

In 1962, Lynn released her first single on Decca Records, "Success," which began a string of releases that would regularly hit the top ten charts throughout the 1960s and 1970s. In addition to recording the songs of other writers, Lynn also began recording some of her own, with 1966's, "Dear Uncle Sam" being the first to make it on the top ten chart. In 1966, she wrote "You Ain't Woman Enough (To Take My Man)," which became a number one hit and made Lynn the first female country artist to have written a top song.

The following decades were filled with professional success for Lynn. She released a number of albums and singles that sold hundreds of thousands of copies and continually made the charts. Some of her most well-known music during this time is "Fist City," "You've Just Stepped In (From Stepping Out on Me)," and "Woman of the World (Leave My world Alone." In 1970, she released "Coal Miner's Daughter," which was the first of her singles to chart on the Billboard Hot 100, not just the country music specific charts. The song later went on to inspiring Lynn's autobiography and the biopic film, both by the same name. 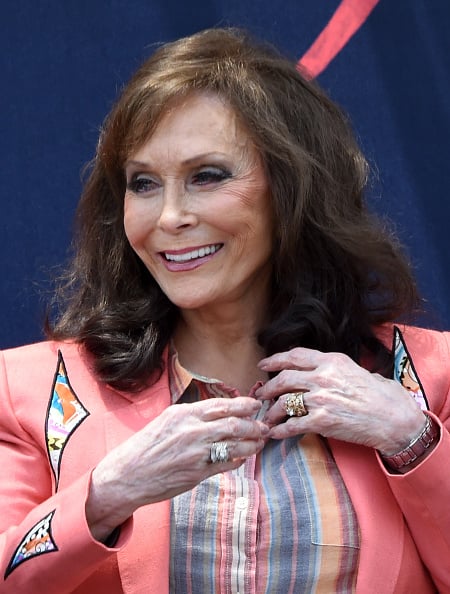 Lynn also collaborated heavily with artist Conway Twitty beginning in 1971. The duo had five consecutive number one hits between 1971 and 1975 and were named the Vocal Duo of the Year by the Country Music Association multiple times. Lynn also received the Entertainer of the Year Awards at the CMAs for her solo music in 1972, the first woman to ever receive that award. Her success continued throughout the decade, culminating in the Academy of  Country Music Awards dubbing her as Artist of the Decade. Lynn was the only woman to have ever won this award as well.

Lynn recorded her final solo album for awhile in 1988 and then began releasing music alongside other artists. In 1993, she released "Honky Tonk Angels" alongside Dolly Parton and Tammy Wynette. She also taped a seven-week series called "Loretta Lynn & Friends" for the Nashville Network. In 2000. Lynn released new music with the single "Country in My Genes," which made the Billboard charts. This made Lynn the first woman in country music to chart singles in five different decades. In 2004, Lynn collaborated with producer Jack White of The White Strips to release "Van Lear Rose." The album was voted the second best album of 2004 by Rolling Stone. Lynn has continued releasing music into the 2010s and 2020s, with 2021 marking the release of her 50th studio album, "Still Woman Enough."

In addition to other awards, Lynn has been inducted into the Country Music Hall of Fame and has been the recipient of the Pioneer Awards at the 30th Academy of Country Music Awards. She has also published a number of books, including two autobiographies and a cookbook.  She has written more than 160 songs and remains the most awarded woman in all of country music.

Personal Life: Lynn and her husband had six children together. One of her songs, Jack, died at age 34 in 1984 while trying to cross a river. One of her daughters, Betty Sue, died of emphysema at age 64.

Lynn has been candid in interviews and her autobiographies about the sometimes tumultuous relationship with her husband. The two fought often and her husband was also an alcoholic. However the couple remained together until her husband died in 1996 after almost 50 years of marriage.

Lynn owns a ranch in Hurricane Mills, Tennessee, which often plays host to a number of large outdoor holiday concerts as well as various racing events. Fans can visit the large plantation home and though Lynn does not regularly live there anymore, she is often present to say hello. 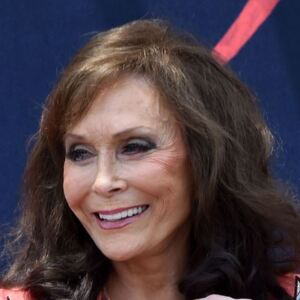