Leslie Cheung Net Worth: Leslie Cheung was a Chinese singer/songwriter, actor, film director, record producer and screenwriter who had a net worth of $30 million. Cheung is considered as one of the founding fathers of Cantopop (Cantonese popular music). He managed to combine a hugely successful film and music career.

Leslie Cheung was born on September 12, 1956 in Central, Hong Kong, China. Cheung rose to prominence as a teen heartthrob and pop icon of Hong Kong in the '80s, receiving numerous music awards, including both Most Popular Male Artist Awards at the 1988 and 1989 Jade Solid Gold Best Ten Music Awards. Though Cheung had never publicly declared his sexual orientation, he once said in an interview with Time magazine: "It's more appropriate to say I'm bisexual. I've had girlfriends. When I was 22 or so, I asked my girlfriend Teresa Mo to marry me." Cheung and Ngai Sze-Pui, a Hong Kong model and actress he met on the set of Agency 24, were in a relationship for two years. In a 1997 concert, Cheung openly revealed his relationship with Daffy Tong Hok-Tak, who remained his partner until Cheung's death. Cheung committed suicide on April 1, 2003 by jumping from the 24th floor of the Mandarin Oriental Hotel, located in the Central district of Hong Kong Island. Cheung left a suicide note saying he had been suffering from depression. Leslie Cheung was only 46 years old. On March 31st & April 1st of 2013, Cheung's former music agent Florence Chan organized two memorial concerts entitled Miss You Much Leslie in honor of the 10th anniversary of Cheung's death. Big names of the Hong Kong entertainment industry such as Jacky Cheung, Tony Leung Chiu-Wai, Andy Hui, Leo Ku, Chilam Cheung, Vivian Chow, Kelly Chen, Joey Yung, Grasshoppers and others performed at the concert at the Hong Kong Coliseum. That same year Cheung's fans from around the world made 2 million origami cranes for the Guinness World Record as a tribute to the anniversary. 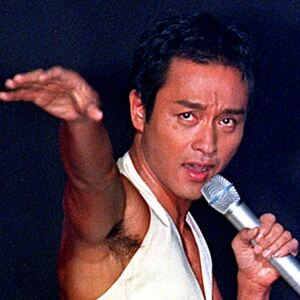