What is Leona Lewis' Net Worth?

Leona Lewis is a British singer, songwriter, model and actress who has a net worth of $10 million dollars. Leona Lewis rose to fame in 2006 when she won the third series of the television music competition program "The X Factor." She went on to release the album "Spirit," which became one of the bestselling albums in UK history. Lewis has released a number of other successful albums since then, and has also appeared in film and on stage and television. She is perhaps best-known for being the one-time serious girlfriend of Simon Cowell.

Lewis' X Factor victory resulted in a £1 million recording contract with Syco Records. Her first single, "A Moment Like This", was released and peaked at #1 in both the United Kingdom and Ireland. Lewis achieved even greater success with her follow-up single, "Bleeding Love," which reached #1 in 34 countries, including the U.K., Japan, Germany and the United States. 2008 was the year when Lewis earned three nominations at the 51st Grammy Awards. She saw the release of her first studio album, "Spirit" in 2008. That album was followed by 2009's "Echo."

After breaking through in the United Kingdom, Leona signed a $10 million record contract with an American record company.

To date, Lewis has had nine top-ten hits in the UK, has been nominated for seven Brit Awards and three Grammy Awards. She has sold more than 30 million records worldwide. Often compared to her idol Whitney Houston, Lewis is the best selling The X Factor act in the United Kingdom.

Leona Lewis was born on April 3, 1985 in London, England. She is of Afro-Guyanese ancestry on her father's side, and of Irish, Welsh, and Italian descent on her mother's side. Lewis has an older half-brother named Bradley and a younger brother named Kyle. As a youth, she went to a series of performing arts institutions, including the Sylvia Young Theatre School, the Italia Conti Academy of Theatre Arts, the Ravenscourt Theatre School, and the BRIT School for Performing Arts and Technology. While at the latter, Lewis began to write and record her own songs, and took jobs as a waitress and receptionist to fund her studio sessions.

Lewis struggled with some significant setbacks early in her career. She landed a lead role in a Paris production of "The Lion King," but had to withdraw after injuring her back. Lewis then recorded a demo album called "Twilight," which ultimately failed to secure her a deal with any record companies. She continued to struggle with getting a contract after recording another unsuccessful demo album called "Best Kept Secret."

Lewis had her big break in 2006, when she appeared as a contestant in the third series of the British television music competition program "The X Factor." She went on to win the competition in December, at which time she signed a £1 million recording contract with judge Simon Cowell's record label Syco Music. Lewis subsequently released her winner's single, a cover of Kelly Clarkson's "A Moment Like This." A massive hit in the UK, the song was digitally downloaded over 50,000 times in less than 30 minutes, and became the 2006 UK Christmas number-one single.

Following her UK breakthrough, Lewis signed a $9.7 million, five-album contract in the United States with the label J Records. Subsequently, in November of 2007, she released her debut album, "Spirit." An instant smash, "Spirit" debuted at number one on both the UK and Irish albums charts, and also became the fastest-selling debut album in both countries. Moreover, it is one of the bestselling albums of all time in the UK, and the bestselling debut by any female artist in the 21st century. Lewis' success continued with the release of the album in the US in April of 2008, when it debuted atop the Billboard 200. "Spirit" launched a total of seven singles, with the lead single, "Bleeding Love," reaching number one on the charts in over 30 countries. Other hit singles included "Better in Time," "Footprints in the Sand," "Forgive Me," and "I Will Be." In recognition of her success, Lewis earned three Grammy Award nominations for the album: Record of the Year, Best Female Pop Vocal Performance, and Best Pop Vocal Album.

Lewis released her second album, "Echo," in November of 2009; like her first album, it went to number one on the UK albums chart. Among its hit singles were "Happy" and "I Got You." In 2012, Lewis released her third album, "Glassheart," which spawned the hit single "Trouble." Next, in 2013, she released a Motown-influenced Christmas album called "Christmas, with Love"; it launched the single "One More Sleep," which became her highest-charting song since "Happy" in 2009. Lewis' fifth studio album, "I Am," came out in September of 2015, and spawned the singles "Fire Under My Feet," "Thunder," and the title track.

Other Singles and Collaborations

Beyond her albums, Lewis has had much success with both standalone singles and various musical collaborations. In 2009, she had a major hit with the single "I See You," the Oscar-nominated theme song from the science-fiction film "Avatar." Lewis had another hit in 2011 with the dance-pop song "Collide," written by Autumn Rowe. Among her many collaborations, she was featured on Michael Bolton's cover of "Ain't No Mountain High Enough" in 2014, and appeared at the Nashville concert of Taylor Swift's "1989 World Tour" in 2015. Later, in 2018, Lewis collaborated with Calum Scott on an updated version of his song "You Are the Reason," and partnered with Pitbull on the song "Amore" from the film "Gotti." Lewis has also collaborated with such artists as James Morrison, Diane Warren, and Ne-Yo. 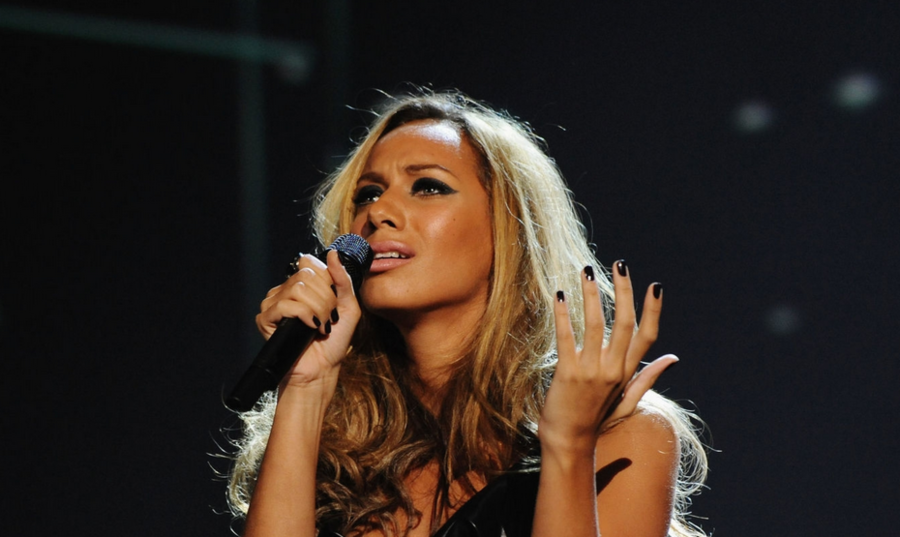 As an actor, Lewis made her debut in the 2014 jukebox musical film "Walking on Sunshine." Two years later, she made her Broadway debut playing Grizabella in a revival of the musical "Cats." On television, Lewis landed the recurring role of Amber Hall on the crime drama series "The Oath" in 2019.

In 2019, Lewis wed dancer and choreographer Dennis Jauch, whom she had been dating since 2010. In March of 2021, she bought a $2.6 million home in the Studio City area of Los Angeles, California, after selling her previous abode to Simon Cowell for $3.9 million.

Lewis is heavily involved in activism and charity. She is a major advocate for such issues as veganism, global water accessibility, HIV/AIDS awareness and prevention, youth empowerment, and animal protection. In 2019, Lewis opened a vegan cafe in Pasadena called Coffee and Plants, which works in partnership with Hopefield Animal Sanctuary.

In 2013, Leona paid $1.2 million for an equestrian ranch in Glendale, California. She sold this property in November 2019 for $2.25 million. Around the time of the sale she purchased a home in Hidden Hills, California for $3.7 million. Again it was an equestrian property.

In March 2021, Leona paid $2.6 million for a home in Studio City, California. In an unusual twist, Leona sold the home to Simon Cowell in late 2020 for $3.9 million. Cowell listed the home for $3.7 million just two weeks later. It's not clear what prompted the switcharoo shenanigans. One month later Cowell sold the home for $3.6 million.