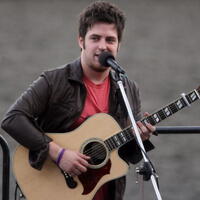 Lee DeWyze Net Worth: Lee DeWyze s an American singer-songwriter best known as the winner of the ninth season of "American Idol" who has a net worth of $500 thousand dollars. Lee DeWyze was born on April 2, 1986 in Mount Prospect, Illinois where he attended St. James Catholic Elementary School in Arlington Heights, Illinois, and Prospect High School in Mount Prospect, Illinois, up until his senior year, when he was expelled because of too many fights. He obtained his GED. , DeWyze worked as a paint salesman. He also worked as a trading floor clerk at the Chicago Mercantile Exchange in 2007 and 2008 before returning to work at the Mount Prospect paint store until he auditioned for "American Idol" and made it through to the Hollywood rounds of the show. The store continued to support him during his "American Idol" run by selling tee shirts encouraging fans to vote for Lee. Prior to Idol, DeWyze had a solo career and formed the Lee DeWyze Band. He had also released two independent albums called So I'm Told" in 2007 and "Slumberland" in 2010. His first post-Idol album "Live It Up" was released on November 16, 2010, His most recent album "Frames" was released on August 20, 2013.