What is Lauryn Hill's Net Worth?

Lauryn Hill is an American singer/songwriter, rapper, producer, and actress who has a net worth of $9 million dollars. She is best known for being a member of the band the Fugees and for her subsequent solo career.

She began singing at an early age and appeared on the soap opera "As the World Turns" (1991) and the film "Sister Act II: Back in the Habit" (1993) as a teenager. Her on-again, off-again stint in the Fugees began at the age of 13 but was often interrupted by acting gigs and then by enrollment at Columbia University. The Fugees released their debut album, "Blunted on Reality," in 1994, and their follow-up, 1996's "The Score," went multi-platinum and garnered them international success.

"The Miseducation of Lauryn Hill" (1998), Hill's solo studio album, was very well-received. The 8x Platinum album debuted at No. 1 on the "Billboard" 200 chart, sold 12 million copies, and earned five Grammys. Hill largely disappeared from the public eye in the early 2000s due to the pressures of fame and disenchantment with the music industry. Her last full-length recording, the new-material live album "MTV Unplugged No. 2.0" (2001), sharply divided critics, and though certified Platinum was commercially unsuccessful in the U.S. A 2004 reunion of the Fugees did not last long. From 2018 to 2019, Lauryn embarked on The Miseducation of Lauryn Hill 20th Anniversary World Tour, and 2020 brought the Ms. Lauryn Hill Live in Concert tour, though some dates were postponed because of the Coronavirus pandemic.

Lauryn Hill was born Lauryn Noelle Hill on May 26, 1975, in Newark, New Jersey. She grew up in a Baptist household in South Orange, New Jersey, with mother Valerie (an English teacher), father Mal (a computer and management consultant), and older brother Malaney. Lauryn's family loved music, and Valerie played piano, and Mal sang at weddings and nightclubs. When Hill was in middle school, her performance of "The Star-Spangled Banner" at a basketball game was so popular that a recording of her rendition was played at other games. In 1988, Lauryn sang Smokey Robinson's "Who's Lovin' You" during Amateur Night on "It's Showtime at the Apollo." She studied at Columbia High School, where future "Scrubs" star Zach Braff was one of her classmates. During her high school years, Hill joined the cheerleading squad and track team, took dance and violin lessons, and started a gospel choir at the school while taking advanced placement courses and mostly making A's.

When Hill was a high school freshman, she started the band Translator Crew with Prakazrel "Pras" Michel. Wyclef Jean soon joined the group, and they started performing in high school talent shows and local showcases. As a teen, Lauryn also took acting classes in New York City, and in 1991, Hill and Jean appeared in an Off-Broadway hip-hop production of Shakespeare's "Twelfth Night," which got the attention of an agent. Lauryn landed a recurring role as Kira Johnson on "As the World Turns" later that year, and in 1993, she co-starred with Whoopi Goldberg and Kathy Najimy in "Sister Act 2: Back in the Habit," had a small role in the Steven Soderbergh film "King of the Hill," and graduated from high school.

Hill, Pras, and Jean renamed Translator Crew the Fugees, and Lauryn and Wyclef became romantically involved with each other. In 1993, the Fugees signed a deal with Columbia/Ruffhouse Records, and released the albums "Blunted on Reality" and "The Score" before disbanding in 1997. Their cover of "Killing Me Softly" reached #1 on the charts in several countries, and "Spin" magazine called it "an instant classic." Hill had been attending Columbia University during this time, but she dropped out after a year.

Solo Career and Other Work

In 1997, she had a cameo in the film "Hav Plenty," and she appeared in the movie "Restaurant" the following year. "The Miseducation of Lauryn Hill" was released in August 1998 and was the year's most acclaimed album. The album spawned the hit singles "Doo Wop (That Thing)," "Ex-Factor," and "Everything Is Everything."

In July 2001, Hill filmed an "MTV Unplugged" special, which was released as an album, "MTV Unplugged No. 2.0," in May 2002. The album peaked at #3 on the "Billboard" 200, and the track "Mystery of Iniquity" earned Lauryn a Grammy nomination for Best Female Rap Solo Performance. The Fugees briefly reunited in 2004 to perform at Dave Chappelle's Block Party in Brooklyn; the group also performed at the 2005 BET Awards and toured Europe before their reunion ended. In May 2013, Lauryn released the single "Neurotic Society (Compulsory Mix)," her first in more than a decade, and she narrated the 2014 documentary "Concerning Violence." Hill has contributed songs to the soundtracks of "The Passion of the Christ," "Surf's Up," "What Happened, Miss Simone?," and "Queen & Slim" and performed on tracks by Nas, Common, Mary J. Blige, John Legend, Method Man, Pusha T, and Teyana Taylor. 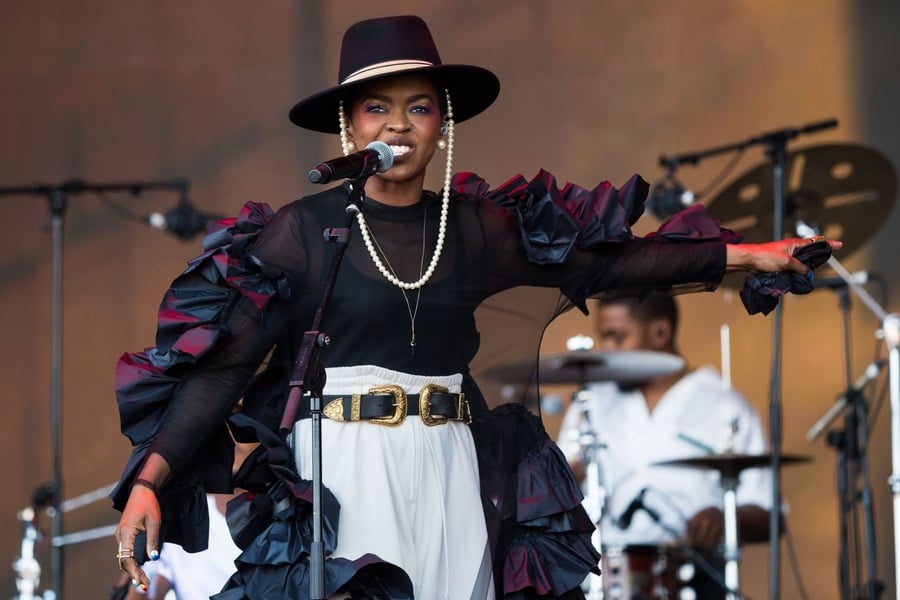 At the peak of her career in the late '90s, Lauryn earned an estimated $25 million from touring, merchandise sales, and album sales. In 2001, Hill paid a $5 million settlement to a group of producers who claimed to helped write and produce some of her biggest songs. This event marked somewhat of a beginning of a downward period for Lauryn. She experienced long album delays and retreated to a self-imposed exile.

In 2012, she was charged with three counts of tax fraud. She simply did not file taxes for the $1.8 million in income she earned between 2005 and 2007. She eventually pleaded guilty to the charges, but she then made essentially no effort to pay her back taxes and penalties. In 2013, she was sentenced to and served three months in prison.

Lauryn began dating Rohan Marley, son of late reggae legend, Bob Marley, in 1996 while she was in a relationship with Wyclef Jean. Hill and Marley welcomed son Zion in 1997, daughter Selah in 1998, son Joshua in 2002, son John in 2003, and daughter Sarah in 2008. Lauryn also has a son, Micah, who was born in 2011 and whose father isn't publicly known. In 1996, Hill launched a non-profit organization for at-risk urban youth called the Refugee Project, and she has raised funds for Haitian refugees and put on a Harlem concert to encourage voter registration.