Laura Pausini Net Worth: Laura Pausini is an Italian pop singer-songwriter and record producer who has a net worth of $20 million. Laura Pausini was born in Solarolo, Emilia-Romagna, Italy in May 1974. Laura debuted in 1993 and won the newcomer artists' section at the Sanremo Music Festival for the song "La solitudine". The song became an Italian standard and hit #1 on the Italian Musica e Dischi singles chart, the Dutch Top 40, and the Flemish Ultratop 50. Pausini's self-titled debut studio album was released in 1993 and has sold two million copies worldwide. Her second album Laura was released in 1994 and sold three million copies worldwide. The single "Strani amori" peaked in the Top 5 on the Italian, Dutch, and Belgian charts. She also released her first Spanish-language self-titled album and made her the first non –Spanish artist to sell over a million copies in Spain. Pausini has released a total of 10 studio albums. She performs in Italian, Spanish, English, French, and Portuguese. She has had six #1 albums in Italy and all of her albums have reached the Top 5 of the Italian Albums Chart. She has sold over 70 million records worldwide. She has won three Latin Grammy Awards, a Billboard Latin Music Award, and four World Music Awards. Pausini was the first Italian female to win a Grammy Award in 2006. She has also earned a Commander Order or Merit of the Italian Republic by President Carlo Azeglio Ciampi. 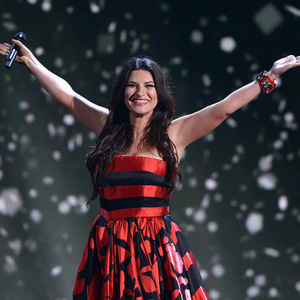