Laura Marling Net Worth: Laura Marling is an English folk musician and songwriter who has a net worth of $600 thousand dollars. Laura Marling was born February 1, 1990 in Eversley, United Kingdom. She was only 16 years old when she emerged on the British indie scene in 2007, thanks to a handful of infectious singles she posted on her MySpace profile.

Her unique, husky voice, an acoustic guitar and a gift for building quirky, catchy folk songs quickly earned her a following. She has been favorably compared to Lily Allen, Regina Spektor and Martha Wainwright. She went on to tour in some high-profile gigs which included an appearance at the 2006 City Showcase: Spotlight London and as the opening act for Jamie T. Although she was still without a label a year later, her debut EP, My Manic and I, was slated for independent release in the late fall of 2007. Early in 2008, Marling was signed to Virgin Records and issued Alas I Cannot Swim, which also came as part of a multimedia Songbox package. In 2010, Marling released her second album, I Speak Because I Can, which debuted at No. 3 on the U.K. albums chart and was nominated for the Mercury Music Prize. Marling's third studio album, A Creature I Don't Know, was released on September 9, 2011 and featured prominently on numerous year-end charts and lists. Marling relocated to Los Angeles, California the following year where she began work on her fourth long-player, 2013's Once I Was an Eagle. The youngest of three daughters, Marling was born in Hampshire, England and learned guitar at an early age. Her father, Sir Charles William Somerset Marling, ran a recording studio and introduced her to folk music, shaping her musical taste-an experience Marling later described as "a bit of a blessing and a bit of a curse. I couldn't slot myself into the age-appropriate genre." 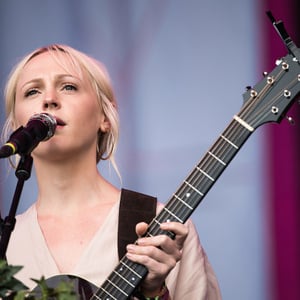