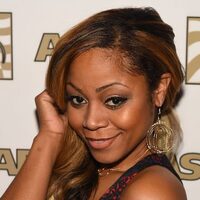 LaTavia Roberson net worth: LaTavia Roberson is an American singer/songwriter and actress who has a net worth of $500 thousand million dollars. She is an original member of Destiny's Child.

She was born November 1, 1981 in Houston, Texas. LaTavia Roberson is best known as an original member of the R&B group Destiny's Child, one of the world's best-selling girl groups of all time. Following her departure from Destiny's Child, Roberson formed the group Anjel, along with former Destiny's Child member LeToya Luckett. When their album was shelved, Roberson took a hiatus from the music business and retreated to Houston, Texas. Roberson began her entertainment career at age nine when she auditioned for a girl group to become a rapper/dancer. She met future band mate Beyoncé Knowles and they became best friends. Roberson got her first real break when she entered the singing competition TV show Star Search with Beyoncé and a group of other female singers and they were accepted to compete. Though the group, called Girl's Tyme, did not win Star Search that year, they went on to change the name of the band several times before getting signed to Elektra Records, but were soon dropped by the label. Success finally found them when they reduced the group to a four-piece called Destiny's Child and were signed by Columbia Records in 1997. Much controversy surrounded Roberson's subsequent exit from Destiny's Child and it wasn't until May of 2014 that Roberson publicly told her side of the story to talk show host Wendy Williams, being quoted as saying, "I definitely did not quit. Who would quit Destiny's Child?…Our conflict with strictly with management. It had nothing to do with the other ladies at all." By "our" she was referring to the simultaneous exit of band member LeToya Luckett. Reportedly, Roberson and Luckett expressed the desire to hire their own personal managers and found out, through the grapevine, that they were being replaced.