What Is KT Tunstall's Net Worth?

KT Tunstall is a Scottish singer-songwriter and guitarist who has a net worth of $6 million. KT Tunstall is probably best known for the singles "Black Horse and the Cherry Tree," "Suddenly I See," and "Other Side of the World." Tunstall has released the studio albums "Eye to the Telescope" (2004), "Drastic Fantastic" (2007), "Tiger Suit" (2010), "Invisible Empire // Crescent Moon" (2013), "Kin" (2016), "Wax" (2018), and "Nut" (2022), and her debut reached #1 in Scotland and was certified 5× Platinum in Ireland and the U.K. KT broke into the public eye when she performed her song "Black Horse and the Cherry Tree" on "Later… with Jools Holland" in 2004, and she has enjoyed commercial and critical success since, earning several awards and a Grammy nomination. Tunstall has written music for the soundtracks of films such as "Bad Moms," "The Kid," "Winter's Tale," "Million Dollar Arm," "Tinker Bell and the Legend of the NeverBeast," and "About Ray."

KT Tunstall was born Kate Victoria Tunstall on June 23, 1975, in Edinburgh, Scotland. Tunstall's half-Scottish, half-Chinese mother, Carole Anne, put KT up for adoption shortly after her birth. Tunstall has never met her biological father, John, who was Irish, but she met her two half-sisters from his second marriage after learning that John had passed away in 2002. KT was adopted by Rosemarie and David Tunstall when she was 18 days old, and she grew up with older brother Joe (who was also adopted) and younger brother Dan in St Andrews, Fife. Rosemarie taught at a primary school, and David worked at the University of St Andrews as a physics lecturer. KT asked her parents for a piano when she was just 4 years old, and she attended Lawhead Primary, Madras College, and the High School of Dundee. She spent her senior year of high school at the Connecticut boarding school the Kent School, and she busked in Vermont. After graduating from high school, Tunstall earned a Bachelor of Arts in Drama & Music from Royal Holloway, University of London in 1996. In 2011, the school presented her with an honorary doctorate in science for her dedication to environmental issues.

When KT was in her twenties, she played in indie bands such as Tomoko and Elia Drew. After signing with the British record label Relentless Records, Tunstall released her debut studio album, "Eye to the Telescope," on December 13, 2004. The album was re-released after KT's performance on "Later… with Jools Holland," and it reached the top 10 in France, Ireland, New Zealand, Scotland, and the U.K. as well as the U.S. "Billboard" Top Rock Albums chart. "Eye to the Telescope" was certified Platinum or higher in five countries and featured the singles "Black Horse and the Cherry Tree," "Other Side of the World," "Suddenly I See," "Under the Weather," and "Another Place to Fall." "Black Horse and the Cherry Tree" was certified Platinum in Canada and Silver in the U.K. and earned a Grammy nomination, and "Suddenly I See" went Platinum in Canada and Gold in the U.K. and Australia and won an Ivor Novello Award. KT got her North American break when Katharine McPhee performed "Black Horse and the Cherry Tree" on "American Idol," causing the single to jump from #79 to #23 on the "Billboard" Hot 100 chart. 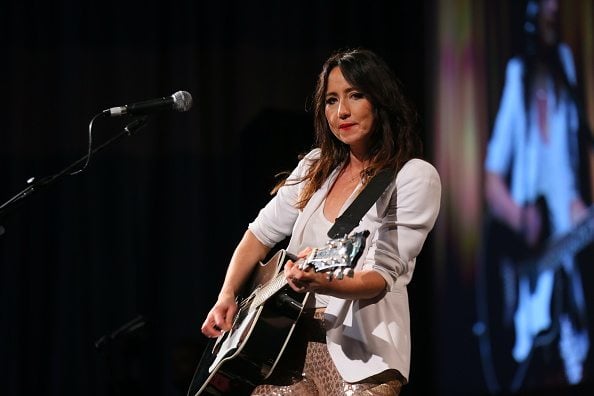 In 2003, KT began a relationship with Luke Bullen, who played drums in her band, and they became engaged on Christmas in 2007. Tunstall and Bullen married on September 6, 2008, and they divorced in May 2013 after a year of separation. KT wed Alexander Preston on February 5, 2015, and she filed for divorce in August 2022. In 2008, Tunstall took part in the Disko Bay Cape Farewell expedition, which traveled to the West Coast of Greenland. Fellow musicians Jarvis Cocker and Martha Wainwright also joined the expedition, and its purpose was to "inspire the creative team to respond to climate change in the Arctic and on their return." Cape Farewell is a British arts organization that "works with artists, scientists and communicators, and brings them together to produce art based in scientific research and findings."

A childhood infection resulted in KT having an undersized kidney, and she underwent surgery to correct the condition in April 2007. In 2008, she began experiencing hearing problems in her left ear, and within a decade, she started having balance problems as well as full hearing loss in that ear. In July 2021, Tunstall announced that she was cancelling her summer tour dates because she had begun experience tinnitus in her right ear. She tweeted, "My thoughts on touring so intensively and consecutively have made me question whether my remaining hearing will be able to handle it, and as a result I have decided that the only healthy way forward for me as a 'live' musician is to completely avoid lengthy back-to-back touring, which causes inevitable exhaustion and stress."

In 2018, KT paid $1.587 million for a home in Topanga, California. The four-bedroom, five-bathroom home measures nearly 4,700 square feet, and Tunstall put it on the market for $3 million in November 2022 after a $1 million renovation. KT also owned a bungalow in Venice, California, which she sold for $2.5 million in 2019.