Kirk Franklin Net Worth: Kirk Franklin is an American gospel musician, choir director, and author who has a net worth of $8.5 million dollars. A gospel singer and author, Kirk Franklin first rose to prominence in the early 90s, performing with the group he founded, which came to be known as Kirk Franklin and The Family.

Their debut album went on to sell over a million copies. He has won multiple Grammy Awards and has been performing as a solo artist since 2000. Kirk Franklin was born January 26, 1970 in Fort Worth, Texas where he was raised by his great aunt, Gertrude, after being abandoned as a baby by his mother. Gertrude collected and resold aluminum cans to raise money for Kirk to take piano lessons from the age of four. Kirk excelled in music, being able to read and write music. He joined the church choir and became music director of the Mt. Rose Baptist Church adult choir at the age of twelve. In 1992, Franklin organized "The Family", which is a seventeen-voice choir, formed from neighborhood friends and associates. In 1992, Vicki Mack-Lataillade, the co-founder of fledgling record label GospoCentric, heard one of their demo tapes and was so impressed she immediately signed up Kirk & The Family to a recording contract. The group released "Whatcha Lookin' 4" in 1996. The album was certified 2x platinum and earned Franklin his first Grammy Award for Best Contemporary Soul Gospel Album. Franklin is known for leading urban contemporary gospel choirs such as The Family, God's Property, and One Nation Crew (1NC), and has won multiple awards, including seven Grammy Awards. 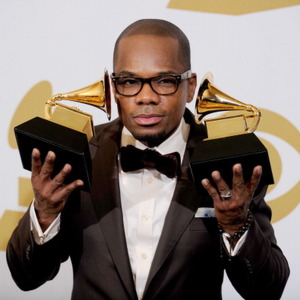