King Krule Net Worth: King Krule is an English songwriter, rapper, producer and singer who has a net worth of $3 million. Archy Marshall (aka King Krule) was born August 24, 1994. Also known as Zoo Kid, DJ JD Sports, Edgar The Beatmaker and Lankslacks, Marshall's childhood was divided between a working-class, lenient mother in East Dulwich and a strict father in Peckham and at age 13 he refused to go to school and stayed up late listening to the likes of The Pixies and The Libertines. In 2010, he began recording music. The red-headed singer gained attention with his distinct, powerful voice on his first single Out Getting Ribs, released under his moniker Zoo Kid. He released several EPs and his debut full-length album 6 Feet Beneath the Moon came out in 2013 to positive reviews. This brought him into prominence, especially in the United States, with performances on Conan and the Late Show with David Letterman. In October of that same year he embarked on a European tour, which was the last time he appeared in the U.K. on tour to date. Following the success of this tour he moved on to a tour of North America. Though his music tends to be difficult to classify, it holds elements of punk jazz, hip hop, darkwave and trip-hop. The name King Krule is inspired by the Elvis song King Creole and not from the Donkey Kong Country character King K. Rool as has been previously rumored. His video for the song A Lizard State has more than 3.7 million views on YouTube. After a short break he went on tour in Europe once again, blatantly skipping his homeland of the United Kingdom. In February 2014, King Krule appeared on the cover of The Fader in its 90th issue. He released his third studio album, The Ooz, in October 2017. 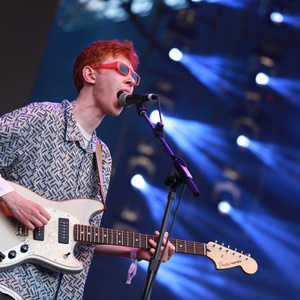