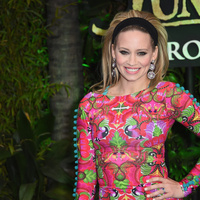 Kimberly Wyatt Net Worth: Kimberly Wyatt is an American singer, dancer, choreographer, and television personality who has a net worth of $1.5 million. Kimberly Wyatt was born in Warrensburg, Missouri in February 1982. She is best known for being a former member of the girl group The Pussycat Dolls. Kimberly started dancing at seven years old and studied at New York's Joffrey Ballet and the Broadway Dance Center. She worked on Royal Caribbean's Explorer of the Seas. She moved to New York and danced on Cedric the Entertainer Presents. She was asked by choreographer Robin Antin to join the Pussycat Dolls. Her trademark move in their videos is the standing oversplit. After the Pussycat Dolls Kimberly became a judge on Got to Dance on Sky1. She has appeared in the movies Starsky & Hutch, 13 Going on 30, and Be Cool and starred in the TV series Poor Paul, Big Time Rush, and Total Drama. In 2010 she formed a new group Her Majesty & The Wolves. The group released their debut album 111 in 2011. She released the single "Derriere" in 2013 from her upcoming debut solo album. Kimberly married model Max Rogers in 2014.