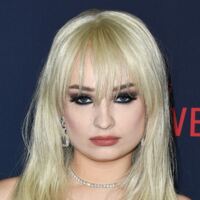 Kim Petras net worth: Kim Petras is a German singer and songwriter who has a net worth of $4 million. She earned fame thanks to her debut album Clarity.