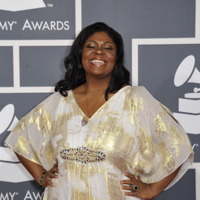 Kim Burrell Net Worth: Kim Burrell is an American gospel singer and pianist who has a net worth of $5 million. Born August 26, 1972 in Houston, Texas, she calls her musical style "jazz gospel," and writes a good portion of the material she records and performs, making her a rarity in the field of gospel music. Burrell performed her first vocal solo with a church choir when she was only one year old. The daughter of a pastor and an evangelist singer, her professional career began with Rev. James Cleveland's Gospel Music Workshop Choir, Trinity Temple Full Gospel Mass Choir of Dallas and the Inspirational Sounds Mass Choir of Houston. Her recording debut came in 1995 with the release of Try Me Again on Pearl Records, which led to her signing with Tommy Boy Gospel, which released a second solo project, the Asaph Alexander Ward-produced Everlasting Life in 1998. Live in Concert followed in 2001, also on Tommy Boy records. Unfortunately, the label folded a year later and she was briefly signed to Elektra Records, but only recorded a handful of guest spots, although she continued to make frequent live appearances. In 2004, she made an unlikely guest appearance on R. Kelly's 3-Way Phone Call and also teamed up with funkster George Clinton on his 2008 album George Clinton and His Gangsters of Love. She has shared the stage with gospel artists Shirley Caesar, Donnie McClurkin and Marvin Winans, among others, and has worked on the secular side of music with the likes of Missy Elliot, Chaka Khan, Stevie Wonder, Whitney Houston and Harry Connick, Jr., to name just a few. She released her first new studio album in 11 years in 2009 on Shanachie Records and another studio effort, The Love Album, was released on Shanachie two years later in 2011.