Kerry Livgren Net Worth: Kerry Livgren is an American musician and songwriter who has a net worth of $10 million. He is best-known for being one of the founding members and primary songwriters for the 1970s progressive rock band, Kansas.

He was born Kerry Allen Livgren on September 18, 1949, in Topeka, Kansas.  Drawn to music at an early age, teenaged Livgren taught himself to play the guitar and other instruments while also writing his own music. He was still a student at Topeka West High School, when he started playing professionally with the Gimlets. The compositions featured by the band were Livgren's work that blended elements of pop, English and psychedelic rock. In 1967, he graduated from Washburn University and two years later he left the Gimlets for the Mellotones, a rhythm and blues band. Eager to front his own band once again, Livgren exited from the Mellotones after a short time and formed a new version of the Gimlets, known as Saratoga.

In 1970, Kerry and Phil Ehart combined their respective bands to form The Kansas Band, which saw several line-up changes before being signed as Kansas by Don Kirshner in 1973. It seems like their three initial albums, Kansas (1974), Song of America (1975) and Masque (1975), failed to bring the critical acclaim and fame the band anticipated. It was the 1976's Leftoverture that brought the band breakthrough success. Or to be more exact, the single Carry on Wayward Son, which Livgren added to the album at the last minute, pushed the album to double-platinum success. He also penned the title song Dust In The Wind for Point of Know Return (1977), as well as the most of the other songs in the album. Having became a born-again Christian in 1979, he concentrated more on his solo career releasing his own albums, Seeds of Change (1980) and Time Line (1983). He left Kansas to form another, this time a Christian rock band A.D., which released only two albums. Meanwhile, he continued to work solo and also contributed a few songs to the continuing Kansas. In 1994, he founded GrandyZine production company and Numavox Records in a converted barn on his property. He also reunited from time to time with some his former Kansas bandmates. He currently lives with his wife Victoria, with whom he has two children. 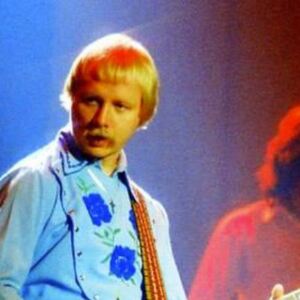