Kerry Katona Net Worth: Kerry Katona is an English singer and media personality who has a net worth of $2 million. Kerry Katona earned her net worth mostly through her television work in light entertainment and reality shows. She has also worked as a ghostwriter and actress on a few commercials.

Born Kerry Jayne Elizabeth Katona on September 6, 1980, in Warrington, Cheshire, UK, she is a multi-talented persona to leave most notable impression with her TV work, mostly in light entertainment and reality shows. As a young girl, Katona would be brought up by 4 sets of foster parents and thus, she would attended eight different schools. Even though she left home at age sixteen to become a lap dancer, she actually started out as a singer in the pop group Atomic Kitten in 1999. The all-female trio racked up several short-lived hits together with their rocky career that was much alike with Kerry's private life. Twenty-one-year-old Katona left the Kitten's line up at some point in 2001 due to pregnancy. The father of her child was Brian McFadden (a member of the all-male band Westlife), with whom she married in 2002. But their liaison ended with a split in 2004, despite having two daughters. Irrespective of the turbulent happenings in her private life, Katona embarked on a fruitful TV career initially appearing on and presenting a mix of light entertainment programs such as Britain's Sexiest…, Loose Women, and elimiDATE. But what made her a true TV diva was turning out a winner of the third series of I'm a Celebrity…Get Me Out of Here! In 2004, and then a runner-up of Celebrity Big Brother 2011. She was also present in the world of advertising, as the face of Iceland TV adverts until being sensationally sacked in August 2009. Meanwhile, she married to childhood sweetheart Mark Croft, with whom she has a daughter.

With a public image that includes tabloid stories about her drug use, smoking, bankruptcy, Kerry Katona announced she would rejoin Atomic Kitten replacing Jenny Frost in November of 2012. 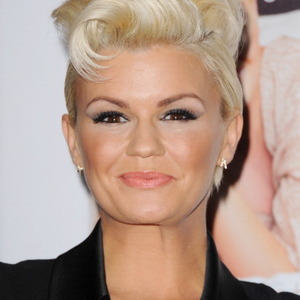