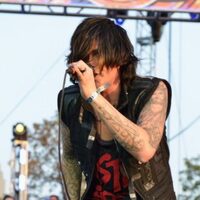 Kellin Quinn net worth: Kellin Quinn is an American musician and singer who has a net worth of $2 million. Kellin Quinn was born in Medford, Oregon in April 1986. He is best known for being the lead singer and keyboard player for the band Sleeping with Sirens. The band formed in 2009 and released their debut studio album With Ears to See and Eyes to Hear in 2010. The album reached #7 on the US Heatseekers chart. Their second studio album Let's Cheers to This was released in 2011 and reached #5 on the US Hard Rock chart. Sleeping with Sirens' third album Feel was released in 2013 and reached #2 on the US Indie and US Hard Rock charts and #3 on the Billboard 200 chart. Their latest album Madness was released in 2015 on Epitaph records. The band often features Quinn and his tenor leggiero vocal range. Before joining Sleeping with Sirens, Quinn was part of the band Closer 2 Closure.