What is Kehlani's Net Worth?

Kehlani is a singer, songwriter and dancer who has a net worth of $6 million. Kehlani began her career as a member of the teen pop band Poplyfe. She went on to achieve solo fame with her mixtapes "Cloud 19" and "You Should Be Here," and later with her studio albums "SweetSexySavage" and "It Was Good Until It Wasn't."

Kehlani, whose full name is Kehlani Ashley Parrish, was born on April 24, 1995 in Oakland, California. She is of Mexican, Filipino, Native American, and African descent. Kehlani was raised by her aunt, who adopted her when her substance abuse-addicted mother was serving time in jail. Her father, meanwhile, was also addicted to drugs, and passed away when Kehlani was a toddler. As a teen, Kehlani went to the Oakland School for the Arts, where her practice specialties were ballet and modern dance. She aspired to train as a dancer at the Juilliard School, but shifted her focus to singing after she suffered a knee injury. Kehlani listened almost exclusively to R&B and neo-soul music as a youth, including the work of artists Erykah Badu and Lauryn Hill.

At the age of 14, Kehlani was recruited to join Poplyfe, a pop cover band based in Oakland. Its music was produced by D'Wayne Wiggins, a former member of the R&B group Tony! Toni! Tone! Within a matter of two years, Poplyfe was performing throughout the Bay Area as well as in other cities. In 2011, the band auditioned for the sixth season of the talent show competition series "America's Got Talent," eventually finishing in fourth place.

When her season of "America's Got Talent" ended, Kehlani left Poplyfe due to managerial and contractual disputes. Subsequently, she avoided any involvement in music in order to avoid being sued by the management. As a result, Kehlani was homeless between 2012 and 2013; as a senior in high school, she moved to Los Angeles without a legal guardian. Eventually, "America's Got Talent" host Nick Cannon contacted Kehlani about joining a rap group. Although she took up the offer, she was unhappy with the group, and moved back to Oakland. To make ends meet there, she started stealing iPhones and selling them. Kehlani got back on the right track some months later, when she released her first solo song on SoundCloud, entitled "ANTISUMMERLUV." After hearing the song, Cannon called Kehlani back, bought her an apartment in Los Angeles, and gave her studio time.

With her time in the studio in 2014, Kehlani recorded her debut mixtape, "Cloud 19," which was released as a free digital download. The next year, she released her second mixtape, "You Should Be Here," which featured guest appearances by BJ the Chicago Kid and Chance the Rapper. A significant hit, "You Should Be Here" debuted at number five on Billboard's Top R&B/Hip-Hop Albums chart. Moreover, it earned Kehlani a Grammy Award nomination for Best Urban Contemporary Album. Kehlani went on a sold-out tour throughout North America and Europe to promote her work.

Kehlani released her third commercial mixtape, "While We Wait," in 2019. Debuting at number nine on the Billboard 200, it included the singles "Nunya," featuring Dom Kennedy; "Nights Like This," featuring Ty Dolla Sign; and "Butterfly." 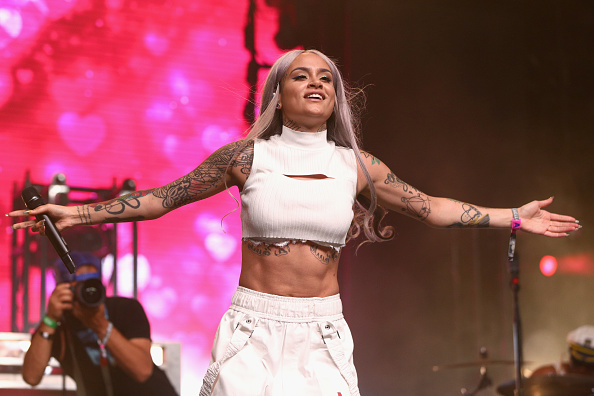 In early 2017, Kehlani released her first studio album, "SweetSexySavage," which debuted at number three on the Billboard 200. Three years later, she released her sophomore album, "It Was Good Until It Wasn't"; her biggest success yet, it debuted at number two on the Billboard 200, and spawned the hit single "Can I." The album also featured guest appearances by such artists as Masego, Lucky Daye, Tory Lanez, and James Blake. Kehlani's third album is "Blue Water Road," which launched the single "Altar."

Collaborations and Other Songs

In regard to her other solo work, Kehlani had a significant hit in 2016 with her song "Gangsta," which was featured on the soundtrack to the superhero film "Suicide Squad." The track peaked at number 41 on the Hot 100.

In early 2016, it was confirmed that Kehlani was dating NBA star Kyrie Irving. A picture of her hand – which suggested she was in bed with Irving – was posted on Instagram, causing a media controversy in which Kehlani was the target of abuse and unfounded accusations that she had cheated on her boyfriend. Consequently, Kehlani attempted suicide. Later, in 2018, she announced that she was pregnant by guitarist Javaughn Young-White. She gave birth to her daughter Adeya the following year. In 2019, it was confirmed that Kehlani was in a relationship with rapper YG; however, the two separated when she discovered YG was unfaithful. Kehlani resides on a small farm in Simi Valley, California.

Not long after selling a property in Simi Valley, California for $1.85 million, Kehlani paid $1.7 million for a home in Topanga, California.