k.d. Lang net worth: k.d. Lang is a Canadian pop and country singer-songwriter and occasional actress who has a net worth of $20 million dollars. A singer-songwriter, k.d. lang is most widely recognized for her pop and country hits, including "Constant Craving", and "Miss Chatelaine", as well as for her successful collaborations with such artists as Roy Orbison, Tony Bennett, and Elton John.

She has won multiple awards for her music, including four Grammy Awards. Born Kathryn Dawn Lang on November 2, 1961 in Edmonton, Canada, Lang has won both Juno and Grammy Awards for her musical performances. Early in life, Lang became fascinated with singer Patsy Cline and was determined to pursue a career as a singer. In 1983, she formed a Patsy Cline tribute band called The Reclines and they recorded an album entitled Friday Dance Promenade. It was her duet with the late Roy Orbison in 1987-a remake of his 1961 recording Crying-that put her on the country charts for the first time and earned Lang a Grammy Award win for Best Country Vocal Collaboration. Perhaps her biggest commercial hit to date was Constant Craving, a cut from her 1992 album Ingenue. Lang went on to pair up with veteran crooner Tony Bennett for a collaborative album. Bennett had nothing but praise for Lang, calling her "the best singer since Judy Garland" in an NPR interview. In 2013, Lang was inducted into the Canadian Music Hall of Fame. Even though such country music greats as Minnie Pearl and Loretta Lynn sang the praises of k.d. Lang, she was never fully accepted by the country music industry. She once explained to People magazine, "I was there in Nashville, a lesbian, a vegetarian, a Canadian and trying to get in with this white, male, Christian society. They were like, 'What the hell are you doing here, girl?'" 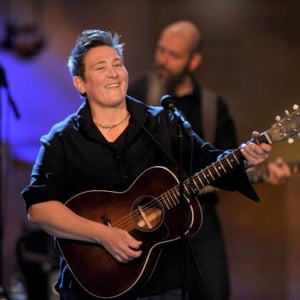