Katie Melua Net Worth: Katie Meluais a Georgian-British singer who has a net worth of $20 million. Katie Melua was born September 16, 1984 in Kutaisi, Georgian SSR, Soviet Union. At the age of 15, she entered a light-hearted TV talent competition called Stars Up Their Nose and her version of Mariah Carey's Without You earned her a victory.

Katie later joined the Brit School for Performing Arts where she studied for a BTEC and Music A-level and was subsequently discovered by Mike Batt of The Wombles fame. Batt signed Melua to his Dramatico label where she recorded a demo. Radio 2 DJ, Terry Wogan became her champion and his support of the single The Closest Thing To Crazy led to the song entering the charts at No.10. Her debut album Call Off the Search went quadruple platinum and in 2004 the young singer set off on her debut live tour. Melua's follow-up album Piece by Piece was released in September of 2005 and the first single Nine Million Bicycles reached No. 3 on the U.K. charts. In 2008, Melua embarked on a world tour to promote her three previous records. Her live performance at London's O2 Arena was released on DVD in May 2009. Melua focused on breaking the U.S. during the first half of 2009 by undertaking an acoustic tour where she performed with her guitar and piano. She then retired to the studio to write her new album with Guy Chambers, Rick Nowels and Mike Batt. On May 24, 2010, Melua's fourth studio album 'The House was released. The singer's scheduled European tour in 2010 was postponed due to illness and in September of that year she was ordered by her doctors to stop working and was hospitalized for six months due to an admitted "breakdown". Her postponed tour resumed in 2011 and she released her fifth album Secret Symphony in March of 2012. Katie Melua confirmed her engagement to World Superbike racer James Toseland in January of 2012. 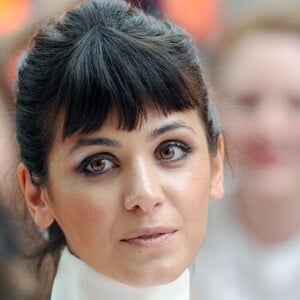