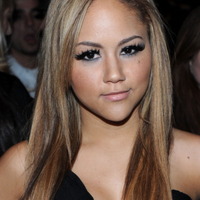 Kat Deluna net worth: Kat Deluna is an American pop singer of Dominican heritage who has a net worth of $1.5 million. Kat Deluna earned her net worth as a pop singer. Her family moved to the Dominican Republic. When she was 12, she performed onstage and was heard by Milly Quezada who commended her vocals. Friends and family recognized her talent at an early age, but it was not until she moved back to the United States at age 14, to Newark, New Jersey, that she realized her potential as a singer. At age 15, she entered a Coca-Cola sponsored karaoke competition. Her version of "I Will Always Love You" took first place. It was through this competition that she met Cuban salsa singer Rey Ruiz. At 19 years old, her voice, by comparison, reached that of Mariah Carey's and Minnie Riperton's. Her charm, meanwhile was put on the same level to the late Spanish diva Selena. A girl from Bronx, New York got everyone dancing through her collaboration with rapper Elephant Man in an infectious single titled "Whine Up". After being signed to Epic Records, she began working with producers such as RedOne and Jane't Sewell-Ulepic, among others. Her debut album, 9 Lives, was released on August 7, 2007. The album peaked at number fifty-eight on the Billboard 200, selling 11,000 copies in its first week. At the Los Premios MTV Latinoamérica 2007 awards show, she won the Best New Artist award. In September 2008 her performance of "The Star-Spangled Banner" at a Dallas Cowboys Monday Night Football game against the Philadelphia Eagles was roundly booed. In January 2009, she released "Unstoppable", featuring Lil Wayne, as a single from the Confessions of a Shopaholic soundtrack. Despite her success, things haven't always come easy for the artist. Kat Deluna was born on November 17, 1988 in New York.