How much is Karol G Worth?

Karol G net worth: Karol G is a Colombian reggaeton singer and songwriter who has a net worth of $8 million. Karol G was born in Medellin, Colombia in February 1991. She released her debut studio album Unstoppable in 2017 on Universal Latin. The album reached #2 on the US Latin chart and #192 on the Billboard 200 chart. Karol G has had #1 hits on the US Latin Airplay chart with her singles "Mi Cama" (solo or with J Balvin featuring Nicky Jam), "Calypso (Remix)" (with Luis Fonsi), and "Creeme" (with Maluma). Her single "Dame Tu Cosita" (with Pitbull and El Chombo featuring Cutty Ranks) reached #1 on the US Latin chart. Karol G's single "Secreto" (with Anuel AA) reached #1 in Spain. Karol G won a Latin Grammy Award in 2018 for Best New Artist. She has also been nominated for Billboard Latin Music Awards for New Artist of the Year and Top Latin Albums Artist of the Year, Female. 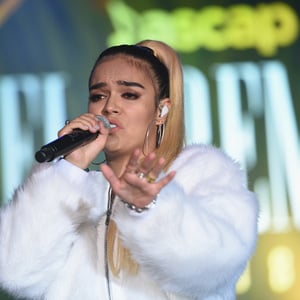