Karen O Net Worth: Karen O is an American musician who has a net worth of $8 million dollars. Born in Busan, South Korea, as Karen Lee Orzolek, Karen O is the lead singer of the indie rock band the Yeah Yeah Yeahs. She grew up in New Jersey after an early childhood spent in her birthplace of South Korea. After high school, she studied at Oberlin College and later New York University's Tisch School of the Arts. Karen O has been part of the Yeah Yeah Yeahs since the group's formation in 2000, when she numbered among the group's founders in New York City. As of 2014, the group has released four studio albums: 2003's "Fever to Tell", 2006's "Show Your Bones", 2009's "It's Blitz!", and 2013's "Mosquito". All of the group's albums except for "Mosquito" have been nominated for Best Alternative Music Album at the Grammy Awards. As the band's lead, Karen O has become famous outside of the strict music sphere for her quirky sense of style. In 2004 and 2005, she had the honor of being named Sex Goddess by "Spin Magazine", and in 2006, "Blender" dubbed her among the hottest women in rock music. In 2008, Karen O took up a secondary gig with Native Korean Rock and the Fishnets. She has contributed to musical acts such as David Lynch, the Swans, and Santigold. Her vocals appear on several soundtracks, including those for "House of Wax", "Jackass 2", and "The Girl With the Dragon Tattoo," the title sequence for which had her doing her very best Robert Plant impression in a cover of "Immigrant Song" by Trent Reznor and Atticus Ross. She turned down an offer to appear nude on the pages of "Playboy". Her first solo album, "Crush Songs", is due out in late 2014. Karen O has been married to Barnaby Clay since 2011. 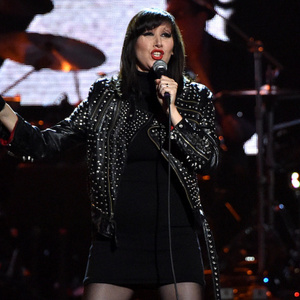