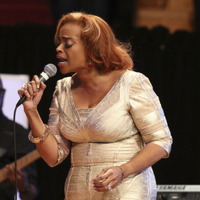 Karen Clark Sheard net worth: Karen Clark Sheard is an American gospel singer and musician who has a net worth of $10 million. She is known as a solo artist and a member of the group The Clark Sisters. Karen is mentioned as a major singing influence by artists including Beyonce, Faith Evans, Mariah Carey, Fantasia and many others.

Karen Clark Sheard was born in Detroit, Michigan and grew up in a musical family. Her mother is the famed gospel choir director, Dr. Mattie Moss Clark. She and her sisters formed the gospel group, The Clark Sisters. The five-member group was not only immensely popular with gospel music fans, but many of their songs also achieved major success on the R&B charts, especially during the 70s and 80s. The group has won two Grammy Awards, and has sold more albums than any other female gospel group ever. Karen Clark Sheard still performs with The Clark Sisters, but she also launched a solo career in 1997. Her first solo album, "Finally Karen", was nominated for a Grammy Award, and reached #28 on the R&B charts, and #2 on the Gospel charts. She has since released four more solo albums, and won a Grammy Award for Songwriting in 2008.