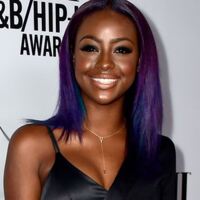 Justine Skye net worth: Justine Skye is an American singer, songwriter, actress, and model who has a net worth of $2 million. Justine Skye was born in Fort Greene, Brooklyn, New York in August 1995. Her debut studio album ULTRAVIOLET was released in 2018. She released the mixtape Skye High in 2012. Justine Skye released the EP Everyday Living in 2013. Her mixtape Emotionally Unavailable was released in 2015 and reached #13 on the US Heatseekers chart and #14 on the US R&B chart. She also released the mixtape 8 Ounces in 2016. Skye had success with the singles "Collide" (featuring Tyga) and "Bandit" which reached #5 on the US R&B/Hip-Hop chart. She has also collaborated with other artists including Vic Mensa, Wizkid, Wale, Jeremih, Lil Yachty, Kylie Jenner, Schoolboy Q, Miguel, and more. Justine Skye created a controversy in 2017 when she kneeled during a portion of her singing "The National Anthem" at a Brooklyn Nets game.