Hayward signed a publishing contract as a songwriter at 17 years old. He answered an ad in Melody Maker placed by Eric Burdon of The Animals and he replaced Moody Blues vocalist and guitarist Denny Laine. He was featured on the band's second album Days of Future Passed in 1967 which was certified Platinum in the US and Canada. The band's albums On the Threshold of a Dream, A Question of Balance, and Every Good Boy Deserves Favour all reached #1 in the UK. Their albums Seventh Sojourn and Long Distance Voyager reached #1 in the US. The band has released a total of 16 studio albums including their latest December in 2003. Their most successful singles include "Go Now", "Nights in White Satin", "Question", "I'm Just a Singer (In a Rock and Roll Band)", "Gemini Dream", "The Voice", and "I Know You're Out There Somewhere". The band has sold over 55 million albums worldwide. As a solo artist Hayward has released eight studio albums. He won an Ivor Novello Award for Composter of the Year and was given a Gold Badge for lifetime achievement by the British Academy of Songwriters, Composers, and Authors. 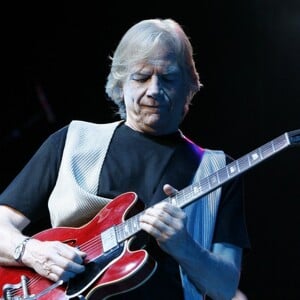