The band gained overnight success, as their first album, Permission to Land (2003), shot straight to number two in the UK charts, selling 3.5 million copies worldwide. The album also earned The Darkness three BRIT Awards. The band continued to gain recognition, gaining two Kerrang Awards for their third song from the album, I Believe in a Thing Called Love. Hawkins left the band in 2006, revealing that he was 'growing tired of the constant routine of the band'. The rocker was in involved in other projects: he set up his solo project, British Whale, releasing two singles- a cover of The Sparks 1974 hit, This Town Ain't Big Enough for the Both of Us (which peaked at number six on the UK singles charts). His second single was an unofficial World Cup anthem called England. In 2008 he became the frontman and lead guitarist for Hot Leg. By 2010 the band went on hiatus. In 2011, Hawkins reunited with the Darkness, touring around Europe, Asia and North America to promote their new album Hot Cakes. 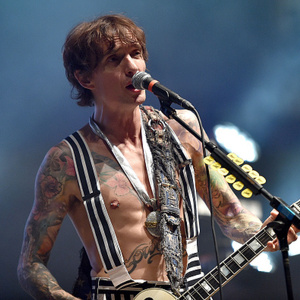