She performed with her family as the Carter Family at 10 years old and then as part of Mother Maybelle and the Carter Sisters. As a solo artist Cash released her debut studio album Appalachian Pride in 1975. She released the albums Press On and It's All in the Family in 1999. Cash released the album Wildwood Flower in 2003 which reached #2 on the US Bluegrass chart. She also released he album Louisiana Hayride in 2003 and the posthumous albums Church in the Wildwood: A Treasury of Appalachian Gospel and Early June. She released several albums with Johnny Cash including their debut studio album Carryin' On with Johnny Cash and June Carter in 1967 which reached #5 on the US Country chart. Her single "If I Were a Carpenter" with Johnny Cash reached #2 on the US Country chart and #1 on the Canadian country chart. In 1969 she won a Country Music Association Award for Vocal Group of the Year with Johnny Cash. June Carter Cash passed away on May 15, 2003 at 73 years old. 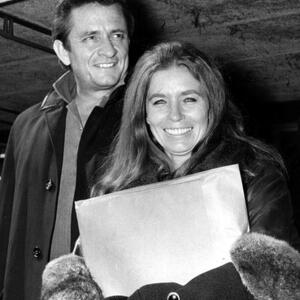