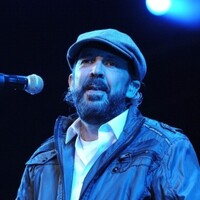 Juan Luis Guerra Net Worth: Juan Luis Guerra is a Dominican musician, composer, and producer who has a net worth of $45 million dollars. Born in 1957 in Santo Domingo, Dominican Republic, Juan Luis Guerra is one of the most famous Latin artists in recent times. He attended Universidad Autonoma de Santo Domingo for literature and philosophy and later studied music at El Conservatorio Nacional de Musica de Santo Domingo before moving to the United States to enroll at the Berklee College of Music in Massachusetts. After graduating, Guerra moved back to the Dominican Republic and released his debut album, "Soplando", in 1984 with several local musicians. They formed the group Juan Luis Guerra y 440 and he became the band's lead singer during the late '80s. 440's 1991 album, "Bachata Rosa", scored Guerra his first Grammy win as it sold more than five million copies around the world. The group's 1992 album, "Areito", generated controversy for its apparently anti-capitalist undertones. Between 1984 and 2014, he has released nearly a dozen studio albums, with two charting on the Billboard 200: "Para Ti" in 2004 and "La llave de mi corzaon" in 2007. Still, four have been certified at least platinum, with "Para Ti" going triple platinum in the United States. Guerra's albums have sold more than 30 million copies worldwide. He has won at least 15 Latin Grammy Awards, two Grammys, and two Latin Billboard Music Awards. His most recent award win came at the Latin Grammys in 2012 when he scored Producer of the Year honors. Guerra is a UNESCO Goodwill Ambassador and organized a benefit concert to build a children's hospital in Haiti following the 2010 earthquake.