Juan Gabriel net worth: Juan Gabriel was a Mexican singer and songwriter who had a net worth of $30 million. Juan Gabriel earned his net worth through a lifelong recording and entertaining career, that spanned over 40 years. Gabriel took a liking to music at a very early age. When he was just 13, he wrote and sang his first song "La Muerte del Palomo." He worked part-time for RCA Records where he wrote chorus of songs for big acts such as Angelica Maria, Leo Dan and Roberto Jordan. He then signed his first recording contract with the RCA Records at the age of 21. It was the birth of a successful music career and Gabriel became one of Mexico's leading singer/songwriters.. During his career, Juan wrote and recorded over 1,000 songs in different genres. He wrote a string of hits for Latin heavyweights including Jose, José, Luis Miguel and Rocio Durical, as well as scoring his biggest hit, "Querida" (My Queen) in 1984, which was at the top of the charts for over a year. As a songwriter, Gabriel received the numerous awards from ASCAP, Billboard as well as Lifetime Achievement Awards by Latin Music Awards. In his private life, Gabriel, who was never married, had four children but insisted they are not adopted, banishing ever-growing speculation of his sexuality. Unfortunately Juan Gabriel died on August 28, 2016 at the age of 66 after suffering from a heart attack. 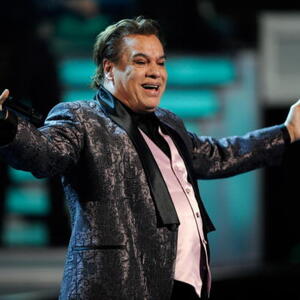