Juan Diego Flórez Net Worth: Juan Diego Flórez is a Peruvian operatic tenor who has a net worth of $5 million. Juan Diego Flórez (Salom) was born January 13, 1973 in Lima, Peru. He is best known for his roles in bel canto operas. On June 4, 2007, he received his country's highest decoration-the Gran Cruz de la Orden del Sol del Perú.

In May 2004, he received the Orden al Mérito Cultural de Lima, from the Mayor of Lima; the Orden al Mérito por servicios distinguidos en el grado de Gran Cruz from President Alejandro Toledo; and was named an Honorary Professor of San Martín de Porres University. Flórez also appeared on the 2-sol stamp, part of a series of five stamps honoring contemporary Peruvian musicians, issued in November 2004. The portrait of Flórez, used on the stamp, was by British photographer Trevor Leighton and was also used for the cover of his 2003 CD Una Furtiva Lagrima. From the classical music world, Flórez received the Premio Abbiati 2000 (awarded by Italian critics for the best singer of the year); the Rossini d'oro; the Bellini d'oro; the Premio Aureliano Pertile; the Tamagno Prize; and the L'Opera award (Migliore Tenore) for his 2001 performance in La sonnambula at La Scala. In 2009, Flórez was nominated for the Best Classical Vocal Performance in the 52nd Grammy Awards for his album, Bel Canto Spectacular (Decca). Flórez married German-born Australian Julia Trappe in a private civil ceremony on April 23, 2007 in Vienna. Flórez was present at the birth of his son, Leandro, who was born on April 9, 2011, less than an hour before Flórez took to the stage in Le comte Ory, broadcast live around the world from the Met. Their daughter, Lucia Stella, was born in the family home in Pesaro, Italy, on January 1, 2014. 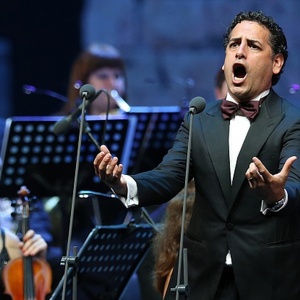