What is Josh Groban's Net Worth and Salary?

Josh Groban is an American singer, songwriter, musician, actor, and record producer who has a net worth of $25 million. Josh Groban has been nominated for several Grammy Awards, Billboard Music Awards, and Tony Awards. Groban has sold over 25 million records worldwide, and many of his songs have hit #1 on the Billboard Adult Contemporary Charts.

Josh was born on February 27 of 1981, in Los Angeles, California. His parents, Jack, was a businessman, and Linda, was a schoolteacher. His parents are Episcopalian and of Polish, Ukrainian, German, and Norwegian descent. In the seventh grade, Groban sang in public for the first time with a solo in the song "S'wonderful" at his schools' cabaret night.

In 1997 and 1998, he attended an arts camp in Michigan where he majored in musical theater and began taking vocal lessons. He went on to graduate from the Los Angeles County High School for the Arts in 1999. During that year, Josh started working for David Foster as a rehearsal singer, where he sang as a stand-in for Andrea Bocelli with Celine Dion. Groban then entered Carnegie Mellon University, intent on studying musical theater. However, after four months, he was offered a recording contract with Warner Bros. Records and subsequently left college to pursue a career in singing.

Josh spent 2000, and 2001 recording his first album and performing benefits shows, such as The Andre Agassi Grand Slam Event For Children, alongside Elton John, Stevie Wonder, and Don Henley. On November 20 of 2001, Groban released his debut, self-titled album. Over the next year, it earned double-platinum status for selling 2,000,000 copies.

In 2002, Josh performed an inspiring duet with Charlotte Church at the Winter Olympics' closing ceremonies in Salt Lake City. Later that year, he began a PBS special titled "Josh Groban In Concert." In November of 2003, Groban released his second album, "Closer," describing the album as a better reflection of him and his sound. Within two months, the album had climbed to number one on the Billboard charts. His cover of "You Raise Me Up" established his reputation as a singer and became one of his signature songs.

In early 2004, Josh released his second live DVD, "Live At The Greek," which aired as a "Great Performances" special on PBS. That year, he also made a standout performance of the song "Remember When It Rained" at the American Music Awards, where he was nominated for Favourite Male Artist in the pop category. In 2005, Groban's recording of "Believe" earned an Academy Award nomination for the songwriter's Glen Ballard and Alan Silvestri and won the Grammy Award for the Best Song Written for a Motion Picture, Television or Other Visual Media. At the awards ceremony, his single "You Raise Me Up" was nominated for the Best Male Pop Vocal Performance.

In November of 2006, Josh released his third studio album "Awake," followed by a 71-city world tour. In October of 2007, Groban released a Christmas album which he recorded with the London Symphony Orchestra and the Magdalen College Choir. The album, "Noël," was extremely successful in the US, becoming the best-selling record of 2007 after only ten weeks and breaking multiple records for a Christmas album. "Noël" was later nominated for Juno and Grammy Awards. 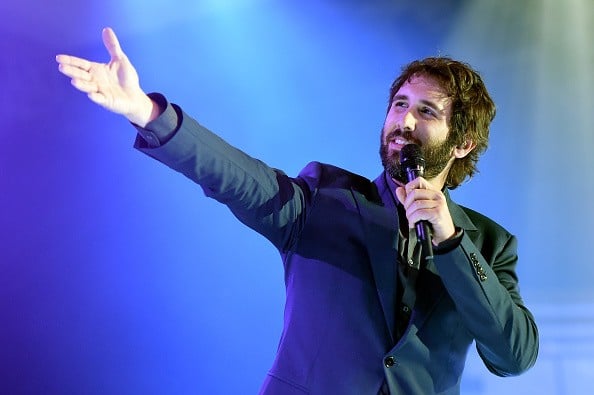 On January 18, 2009, Josh performed a duet with Heather Headley at Barack Obama's Presidential Inauguration. The next year, Groban put out his fifth studio album, "Illuminations," which was produced by Rick Rubin. Unlike his previous records, Josh wrote or co-wrote 11 out of the 13 songs on the album. In the spring of 2011, he went on an 83-city tour called the Straight to You Tour to promote the new record. In 2015, the album "Stages" was released, consisting of all Broadway musical covers.

In 2016, Josh performed as Pierre Bezukhov in the Broadway musical "Natasha, Pierre & The Great Comet of 1812," which is an electropop opera based on Tolstoy's "War and Peace." For his performance, Groban was nominated for the 2017 Tony Award for Best Actor in a Musical. "Bridges," the eighth record by Josh, was released in 2018. The album debuted at number two in the US and the top 10 in the UK.

In addition to his singing career, Groban has acted in several films and television series including, "Crazy, Stupid, Love," Muppets Most Wanted," "The Office," and "It's Always Sunny in Philadelphia." Josh has appeared on "The Oprah Winfrey Show," "The Tonight Show with Jay Leno," "Jimmy Kimmel Live!" and several other prominent late-night television shows. He remains one of the best-selling musical artists of all time.

Josh dated actress January Jones from 2003 until 2006. He had a two-year relationship with Kat Dennings starting in 2014, and in 2017 Josh began dating the actress Schuyler Helford.

In January of 2020, Groban purchased a house for $2.255 million in the Los Feliz hillside neighborhood of Los Angeles. The home, built in the 1970s by the architect Tony Ngai, has stunning views of the Santa Monica Mountains below. The house is 2,100 square feet and has three bedrooms and four bathrooms.