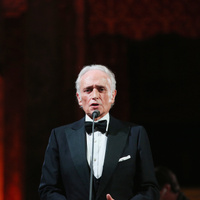 Jose Carreras net worth: Jose Carreras is a Spanish tenor who has a net worth of $250 million. Jose Carreras was born in Barcelona, Catalonia, Spain in December 1946. He is known for his performance in the operas of Puccini and Verdi. Carreras made his operatic stage debut at just 11 years old starring as Trujaman in Manuel de Fall's El retablo de Maese Pedro. He has gone on to star in more than 60 roles. He is perhaps best known for his work as one of the Three Tenos with Placido Domingo and Luciana Pavarotti. He also started and serves as president of the Jose Carreras International Leukemia Foundation. He has received several awards and performed in complete operas by Bizet, Donizetti, Giordano, Halevy, Massenet, Puccini, Saint-Saens, and Verdi. As a member of the Three Tenos their recording of their debut concert at 1990 FIFA World Cup Final became the best-selling classical album ever.