Jordan Pruitt Net Worth: Jordan Pruitt is an American recording artist who has a net worth of $1.5 million. Jordan Lynne Pruitt was born May 19, 1991 in Loganville, Georgia. She began singing public in church at age four and writing songs at age nine. After recording a demo album in 2006, Pruitt was discovered by producer Keith Thomas and later signed to Hollywood Records.

Pruitt's debut studio album, No Ordinary Girl, was released in February 2007 and included her first charting single Outside Looking In. The album peaked at No. 64 on the Billboard 200 chart in the United States. Her second album, Permission to Fly, was released in August 2008. Pruitt splits her time between a home near Franklin, Tennessee and one in Los Angeles, California when not on tour. On August 3, 2012, Pruitt announced that she had auditioned for the third season of the American popular singing television competition The Voice where she sang The One That Got Away by Katy Perry. Christina Aguilera was the only one of the four coaches to turn around and Pruitt became part of Team Christina by default. During Pruitt's battle competition, Aguilera ruled Adriana Louise the winner, eliminating Pruitt from the competition. Following Pruitt's elimination from The Voice, Jordan Pruitt tweeted fans to say she was taking on a new musical genre. In May 2013, Pruitt announced that her first country EP would be released in 2013 and that she would go on tour in the summer of 2013. 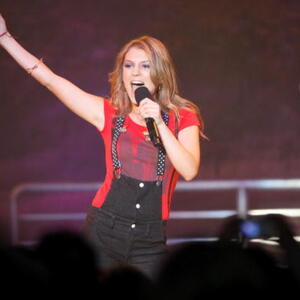